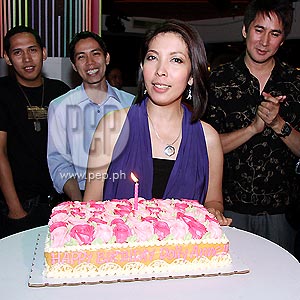 Surrounded by her closest friends in and out of showbiz, newspaper columnist Dolly Anne Carvajal blows out the candles on her birthday cake. Her wish? "For complete healing from my deep vein thrombosis."

Dolly Anne Carvajal celebrated her birthday at Tropezz Greenbelt last September 20. The "Dollywood" columnist, who gets her share of controversies from time to time, is the daughter of the late Queen of Intrigues, Inday Badiday.

"I had a big celebration...It's my second lease on life," said Dolly Anne.

The birthday lady was hospitalized for eight days last March when she was diagnosed with deep vein thrombosis or DVT. According to a Web medical dictionary, DVT "occurs when the flow of blood is restricted in a vein, and a clot forms. It commonly affects the lower leg or thigh."

But the ailment did not alter the disposition of Dolly Anne at all. When she greeted each guest that night, she was the usual gracious host.

The venue was filled with celebrities, and the night with fun and booze. There were even drinking games, courtesy of Sober Club, a mobile bar which specializes in shooters.

Also spotted that night were Amalia Fuentes, the birthday lady's "nanay-nanayan," and her apo Alyssa. When the entertainment writers inquired about the health condition of her daughter Liezl, she said: "Ipagdasal na lang natin siya."

It will be recalled that Gabby's comeback movie was supposedly via that film, which stars Jolina Magdangal. But the 43-year old actor signed a contract with ABS-CBN, and settled to be included in another project of GMA Films instead.

("Sulsoltant" is Rose Flaminiano's play on the "consultant" to describe Nadia.)

But any tinge of intrigue was set aside.

Dolly Anne promised her guests a fun-filled night, and she gave them just that. Celebrities sang, danced—some even got drunk—like no one was watching. It was the party to beat!