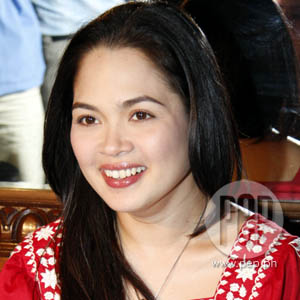 Judy Ann Santos firmly believes in utang na loob. When the Regal Entertainment movie Mag-ingat Ka Sa...Kulam was offered to her with a talent fee that's half her usual rate, she accepted the project without hesitation. After all, it was Regal that gave her the break via the movie Sana Naman (1989). It was a box-office hit even though, at that time, Mother Lily Monteverde, the film outfit's matriarch, admits it was a gamble on her part.

Of course, after the movie became a hit, Juday's career ballooned to what it is now today. And the actress became one of Regal's prized possessions.

The actress also has to sacrifice other projects for the said movie.

But after watching the finished product, Juday raves of how impressive the movie was in terms of acting and special effects. "Para na siyang pang-Hollywood!" she enthuses.

More than the talent fee and utang na loob, Juday also stresses that she really wants to help Mother Lily to still produce movies. Aside from ABS-CBN's Star Cinema and GMA-7's GMA Films, Regal is the only mainstream film company that manages to produce movies all year round.

To this Mother Lily assures, "Kahit hindi masyadong kumikita ang ginagawa ko, I will still make movies. Because, and this is just a repetition, I will always remain a movie fan."

Regal Entertainment celebrates its 48th year in the film industry, and Mag-ingat Ka Sa... Kulam begins the company's year-long celebration when the movie opens on October 1 in theaters nationwide.