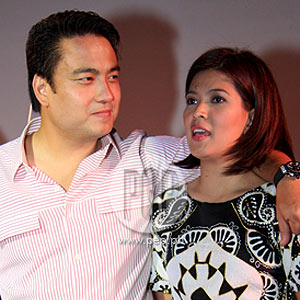 The atmosphere was crisp with fun and anticipation at Senator Bong Revilla's birthday celebration last night, September 24, at the C3 Events Place in Greenhills, San Juan.

The invitation was for 7:00 pm but guests only started trickling in at 8:00 p.m. Early birds were former senator and basketball legend, Robert Jaworski, who came with wife Evelyn Bautista-Jaworski and son Dodot; actor Tirso Cruz III and wife Lynn; comedian Joey Marquez and actor Phillip Salvador, who made it a point to visit every table and greet everyone warmly.

A little later, while Till There Was You was playing in the background, actress Lani Mercado walked in sans her husband to welcome the guests. The ever-gracious host was all smiles.

Birthday boy Bong Revilla came in a few minues later, flashing his signature chinky-eyed smile, dressed simply in a red-striped polo and black slacks. It was time to party and the sumptuous buffet was opened to the guests.

Bong's sisters Rowena and Andrea, with her husband Rizal Governor Junjun Ynares, were there. Andrea related that she felt a bit heavy and wanted to lose some pounds. Still, "I want to have another child," she enthused. "My baby is now ten months old."

The eldest of the family, Bryan, was without a date, unlike younger brother Jolo who came in with rumored girlfriend, actress Lovi Poe.

Very pregnant and obviously ready-to-pop at any moment was Bong and Lani's eldest daughter Inah who was with husband Vince del Rosario.

Even the little angels partied with the guests: Gianna, Loudette, and youngest Ram, who was swayed to muster, "No, not allowed..." when teased if he already had a girlfriend.

As the band continued to play, some gathered at the buffet while others began eating. Controversial manager Rose Flaminiano was one of those who braved the buffet line filled with press people.

Eat Bulaga's Jose Manalo and Wally Bayola opened the program by singing, Macho Gwapito, which cracked up everybody when they threw in jokes about the birthday boy. Video messages for Bong followed suit.

Sen. Kiko Pangilinan, in his message, expressed his appreciation to Bong and greeted him jokingly with a "Happy 24th birthday," intentionally reversing the number of Bong's real age.

The night went on with excitement and "multi-focusing" as celebrities held their mini-presscons on different corners and big stars kept on arriving. At one point, when comedian John "Sweet" Lapuz took on the mic duties, he begged the crowd to give him their attention. But he was usually half-successful as the likes of Aga Muhlach would steal his scene.

The music of Freestyle also gave the night a delightful and relaxed air.

Much to the delight of the crowd, later in the evening, birthday boy Bong found himself onstage with wife Lani Mercado and with actresses Gretchen Barretto and Rufa Mae Quinto, who were both linked to him at one time. "Kulang pa ng isa," Rufa Mae kidded, pertaining to Ruffa Gutierrez who had already left the party.

Bong enjoyed himself to the full, laughing and exchanging pleasantries with guests throughout his successful birthday party, which ended way past midnight.

To view PART I of photos, check out this link.