Baron Geisler rebuts blog about his getting drunk in Venice 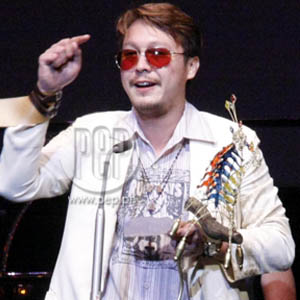 A showbiz web log (blog) recently put out an article about Baron Geisler getting drunk at the recently concluded Venice International Film Festival in Italy. Baron contradicts the report by relating his experiences after the event.

It seems that alcohol-related issues can't leave Baron Geisler alone. One such controversy surfaced on a showbiz web log (blog), which claimed that the actor got drunk and went wild in Venice, thus missing his flight back to the Philippines.

The award-winning actor got wind of the news only last night, and was very surprised. He explained to The Buzz, "After the awards night, may cocktails, may kainan. May mga champagne pero everything went okay naman. Tikim-tikim lang."

WHY HE WAS DELAYED. Baron arrived in Manila last September 9. Though it was true that he got delayed, Baron calmly told The Buzz that his ticket could not be rebooked. "Hindi na puwedeng i-rebook, e. Parang promo siya, e. Actually September 7 sana [pero hindi puwede], so I had to stay."

Contradictory to the blog's report, Baron said he enjoyed his stay in Venice.

AGAINST THE NORM. Because of his recent controversial issues in and around showbiz, Baron has been labeled the "Bad Boy of Star Magic." How does Baron feel about this?