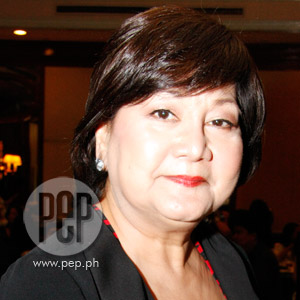 Rose Flaminiano was initially a film producer before becoming the controversial manager of Gabby Concepcion.

Love her or hate her, Rose Flaminiano has seemingly become part of Filipinos' breakfast fare nowadays courtesy of her rift with talent Gabby Concepcion.

She is in the news menu every week, and that's not even a complaint but a simple fact brought about by the court case she had filed against ward Gabby and, recently, her heated exchange with former actress Nadia Montenegro.

Her visibility has come to a point that this question is begging to be asked: Who is Rose Flaminiano?

To sum it up, Rose Flaminiano or Mommy Rose as she would later be referred to, started out in the industry as a producer of bold films. "Before that, sa taxi business ako. Nagkataon lang dahil may mga kaibigan ako na nagsabi mag-produce daw ako. Sinuwerte naman."

She cited that her entry was in 1984. And her outfit, the FLT Films International, reigned supreme, "Kay [Pres.] Cory Aquino na nun. And sa MTRCB [Movie and Television Review and Classification Board] nung sa akin, si [Henrietta] Mendez and si [Manoling] Morato."

She stressed that there was nothing like making movies—and money—then. "Lucrative? Yes, yes. ‘Di katulad ngayon wala na talaga."

She specifically mentioned The Bingbong Crisologo Story because the said movie marked FLT Films' turn towards more script and critique-conscious films. There are, of course, other movies which FLT had produced that touched on other genres: political satire in 1991's Mongolian Barbecue, starring Eric Quizon and Jun Urbano; comedy in 1994's Swindler's List, with Leo Martinez and Nino Muhlach; horror in Tabi Tabi Po (2001) starring Angelica Panganiban and Antoinette Taus; and a try at drama/ action/ love story in the Robin Padilla-Kris Aquino starrer, You and Me Against the World in 2003.

So is she closing her doors to producing yet again?

"Hindi naman," she denied. "Kaya lang nakikita ko mahirap na. Mahirap." But her love for challenges makes it difficult for her to abandon her producer's hat.

A mother of four and a grandmother of two, she was proud to note that her kids are all doing well and are okay with their lives. Her eldest is 37 years old, "Si Roderick, tapos nun si Lizette, 35, and then si Marivic, 30 years old, and then si Ed who's 25." Her grandchildren are named Kevin, who's in high school already, and Seven, who's two.

She added that her kids, some of whom are in the U.S., have 9-5 jobs. "Mas gusto nila yung they work eight hours a day, 'tapos with overtime. Masaya na sila dun."

Mommy Rose also wears the "wife" cap, being the better half of practicing lawyer, Ed Flaminiano.

And this workaholic has other business ventures. "I have a housing, I have three subdivisions...developer ako." Her properties, which she said are all doing well, are called Rosmond. "Tatlo ‘yan, lahat ‘yan Rosmond 1, 2, 3. Yung dalawa 'asa Tarlac City, yung isa, sa tabi ng Fort Ilocandia. Lahat ‘yan, all in all, ang total ay 15 hectares."

But of course, the title that has put her in the map of most Filipinos is her being manager to Gabby Concepcion. What is so ironic about the fact is that, she did not really pursue the role to begin with.

And that started her relationship with the actor.

But the hubbub surrounding her now is not actually a first for Mommy Rose. In the past, she had figured in showbiz issues involving Rudy Fernandez, Judy Ann Santos, and Manny Pacquiao. The cause: Money. In the case of Rudy and Juday, Rose reportedly owes them some talent fees. For Manny's part, the producer-manager allegedly borrowed a hefty sum from the wife.

Setting aside the issues which had been hurled at her, Rose Flaminiano said that what she simply dreams of is "Bawasan ang trabaho."

Love her or hate her, these days, we can't really help but have her in our living rooms via our TV sets. She is Rose Flaminiano—businesswoman, producer, and controversial personality in showbiz.