Katrina Halili admits she has stopped looking for a boyfriend 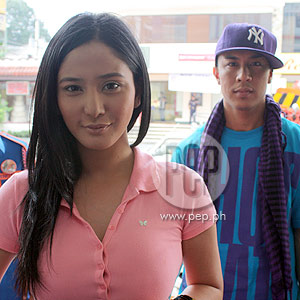 PEP (Philippine Entertainment Portal) met up with one of GMA-7's prized possessions, Katrina Halili at the opening of Jay-R's Mini-Stop in San Juan on September 30. She arrived together with Kris Lawrence, who is rumored to be her current boyfriend.

Kris Lawrence, whose claim to fame is his winning ABS-CBN's talent search, Star in a Million, was in the event to support his good friend Jay-R. Kris and Jay-R have been good buddies since way back when they were in high school at the St. Genevieve High School in Panorama City, U.S.A.

When asked how she became close to Jay-R, on the other hand, Katrina laughed, initially evading the question and addressing some of the people near her with, "Pano ko daw nakilala si Jay-R?" She later responded with a safe, ""Matagal na. Lagi kaming nagkikita sa SOP, ganun."

Then again, Jay-R's buddy Kris and Katrina became close when, together with singer Jonalyn Viray, they had had a show in the U.S.

The actress, the erstwhile resident baddie of GMA-7 but now being cast as leading lady, informed that her work is basically the thing that is making her demeanor light.

Currently, she is busy with a new soap opera and is about to start shooting for a movie under Octoarts. "MWF, I do Gagambino. October 20 na ‘yung airing niya, right after Dyesebel. Then, Tuesdays and Thursdays, may One Night Only [shoot ako]. ‘Pang Metro Manila Film Fest [‘yung One Night Only]. Kasama ko dito si Jennylyn Mercado, Diana Zubiri, Paolo Contis and marami pa."

But as for her seemingly inner glow, she quipped, "Inspired nga."

Does she have someone special to credit for that?

"Wala pa," she answered, laughing like she meant differently.

Kris Lawrence had actually attested to Katrina's different-from-reel character. When asked by GMA-7 about her, he related, "Si Kat[rina] sobrang bait, sobrang down to earth... One thing I like about her is sobra syang maalaga, like in the little things... Like when I'm sleeping in the car tapos medyo matigas ‘yung headrest or something, kumukuha siya ng pillow, you know little things like that."

"Sana it goes a good way," the 26-year old Fil-Am singer said about his and Katrina's friendship.

ADVERTISEMENT - CONTINUE READING BELOW ↓
So is she still on the look out for a boyfriend? "Actually, ano, nag-stop na," she revealed, giving away her present status in the end.
Read Next
Read More Stories About
Katrina Halili, Kris Lawrence, Jay-R
Celebrity Updates