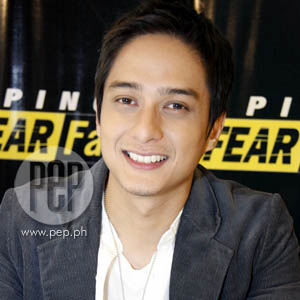 "Whatever she wants, it has to be her day. I mean, I'm not surprised na sinabi na pala niya... It's something that's playing around our heads but we never got down to planning it. There's no specific date yet," says Ryan Agoncillo about fiancée Judy Ann Santos's wish to have an intimate island wedding.

Back from his taping in Argentina for his reality show Pinoy Fear Factor, the TV host-actor said he is just happy to be home. "Ako lang yata pumapalakpak sa eroplano! Di nila maintindihan...I was so excited to be back!"

As for pasalubong for his lady love, "I bought her something like a shawl na ginamit ng mga Argentinians na balabal... Puwede niyang gamitin ‘pag giniginaw siya sa tapings."

Addressing the issues hounding Judy Ann, like the BIR (Bureau of Internal Revenue) case filed against the actress, Ryan said, "[Even] when we were starting to get to know each other, now we're together, we're gonna get married... I'm always there, she always consults me... I'm no expert about taxes, but I try as much possible to be just there whenever kailangan niya ng mahihingahan."

He expressed his wish that the case ends soon so that the two of them would have other important matters to focus on, including their plans to settle down.

When told about Judy Ann's revelation to the media that she wanted an intimate island wedding and, she hoped, a family by 2010, Ryan remarked, "Whatever she wants, it has to be her day. I mean, I'm not surprised na sinabi na pala niya... It's something that's playing around our heads but we never got down to planning it. There's no specific date yet."

Ryan has finished his taping for Pinoy Fear Factor. He said that the experience "exceeded my expectations definitely, there were a lot of records broken... The Pinoys actually impressed the Argentinians, they even had to rewrite some stunts because it would be too easy [for the Pinoys]."

Aside from Pinoy Fear Factor, Ryan is also set to star in an action-packed teleserye, Pieta.