Does Ramon Revilla Sr. really have 80-plus kids? 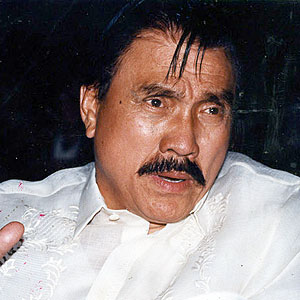 Rumor has it that former senator and action star Ramon Revilla Sr. has 80 or more children and he has yet to clear up the speculations. "Having children is a big responsibility," he once was quoted as saying. So, how many exactly is he responsible for?

One of his claims to fame is his anting-anting or amulet, which makes his film characters defy death.

In real life, it seems former senator Ramon Revilla Sr. has the same powers to defy death's claws. He survived a stroke just recently. Add to that his being the object of one of showbiz's undying ‘macho' rumors—that he had fathered more than 100 children.

Judging from the many articles written about the erstwhile action star- lawmaker, the media have not really gotten a clear story from Mr. Revilla ever. Once, when a newspaper reporter posed the question to him, his response was simply: "I don't have many children... and it's far less than a hundred."

One of his daughters, Rowena Bautista-Mendiola, bemoaned her father's usually cryptic response, admitting that it adds to the speculations.

Another daughter, Andrea Bautista-Ynares, recounted an incident: "Iniinterview yata siya, tapos he did not answer so sila lang ang nag-conclude." His vague response is partly to blame for the persistent rumor about his alleged numerous kids, she admitted.

"Alam mo naman ‘yun," Rowena exclaimed, hinting that Mr. Revilla may just be enjoying a bit of the "notoriety."

A man's man. Ramon Revilla Sr., it could be said, has always been noted for his macho image. In his films, he looked tough, like he could kill you with a glance, and he was pretty convincing as a man who had an agimat or supernatural power.

Real life was no different. Tall and muscled, his physical features made it easy for others to think that he was no man to mess around with.

Born Jose Acuña Bautista on March 8, 1927 in Imus, Cavite, he assumed the name Ramon Revilla when he entered the movies.

One of the 10 children of businessmen Ildefonso Bautista and Andrea Acuna, he already had a degree in Commerce from the Far Eastern University before he got discovered (while he was pumping gas) to appear on the big screen.

But in his initial showbiz entry, the young Ramon Revilla was cast in bit roles, which was just not enough for him so he left the movies to be head of the Secret Service Unit of the Bureau of Customs in 1965.

Like the tough guy he was, he returned to showbiz on his own terms, creating his own film production, Imus Films, for him to star in. Together with wife Azucena, they ran the film outfit with Revilla writing and directing his films.

In 1973, Revilla won a Famas Best Actor Award for Hulihin si Tiyagong Akyat. Imus Films was also recognized as Outstanding Film production in 1975. The next year, Revilla snagged the Outstanding Producer of the Year Award. In 1979, he was Most Outstanding Actor and Box Office King. At that point, there was really no stopping his popularity.

Later in his career, his characters in the films Pepeng Agimat and Nardong Putik gave him the image of being invincible—a superhuman who had in his keeping a special anting-anting.

The image is somewhat alive until now.

The statesman, the family man. In 1992, the action hero became a senator, holding office until the end of his three terms in 2004.

Despite having a number of detractors, Senator Ramon Revilla Sr., was able to mark his stay in the senate as the author of some important bills. But the one he spearheaded that raised his popularity was the bill casually called the ‘Revilla bill'.

An amendment to the Family Code, enacted into law on February of 2004, states "That illegitimate children may use the surname of their father if their affiliation has been expressly recognized by the father through the record of birth appearing in the civil register, or when an admission in a public document or private handwritten instrument is made by the father."

"The child should not suffer the stigma of his illegitimacy," the senior Revilla was once quoted as saying.

The amendment made sense, more so because a celebrity who was rumored to have sired a number of "love children" created it.

On paper, then senator Revilla was married to Azucena Mortel who died in 1998. Azucena, or Cena as she was fondly called, gave him six children: Marlon, Rowena, Princess, Bong, Strike, Andrea, and Diane.

But there were also other offspring who called Ramon Revilla Sr. ‘Dad'. The more well-known included: Ramon Revilla Nicolas Bautista Jr., once the Mayor of San Leonardo, Nueva Ecija; and Evelyn Bautista-Jaworski who is the wife of basketball legend, Robert Jaworski.

Andrea, his daughter with legal wife Cena, admitted that they were made aware of their other siblings since they were little. "Kasi we were raised naman by our mother to accept our siblings—‘yung sa ibang anak ng daddy ko sa ibang babae. We were raised that way... wala naman silang kasalanan, you have to accept them, kung ano man ‘yun."

Giving a peek on her dad's character, Andeng said that his way of bringing up his kids was through a firm hand. "When he [dad] was younger he was very strict."

"But nung binigay niya ‘yung blessings niya, ‘yun ‘yung sign ko na we were meant for each other," Andeng, who is now married to Junjun Ynares (Governor of Rizal), has a 10-month old baby.

"But now, of course, he's okay," Rowena remarked, pointing out that their dad's iron hand has mellowed. It is not lost on them that his reason for his parenting technique was to put much value on parenthood.

"Having children is a big responsibility," the senior Revilla said.

The father of many kids. "I should not be admired for this," when asked about his many kids with different women. "It's wrong, very wrong. Although I don't regret anything that I had done in the past, I have learned my lessons from it. I now want to impart these lessons to the future generation. I want to set a good example, and I am doing this now with my children."

Urged to give her siblings' names, she begged: "Di ko naman memorize lahat... [And] para ano? ‘Wag na...Huwag na lang mga names, baka mamaya maano pa...." She only laughed and changed the direction of the conversation when encouraged to say more.

She again insisted that there were no bad feelings between her and her other siblings. "Wala, wala ako talaga." Rowena said that her dad even gave her the duty as the one in charge of helping finance the schooling of her siblings. "Accepted ko na ‘yun. ‘Yung [pinakabata], ako ‘yung bahala sa school niya. [And] I handle ‘yung pang-school ng mga [iba pang] kapatid ko sa labas, so I know lahat."

As for her siblings from both her mom and dad's sides, she was enthusiastic to note: "We're close sobra, specially me and Andeng and Bong and Strike... Even Princess naman and Diane.

"As much as possible, every other weekend we see each other. Sana sa Cavite, eh," referring to their ancestral abode. "Dati every Sunday pero dahil sa sobrang busy, hindi namin nagagawa. But still we see to it na... [the] next Sunday we're there. Iba na [nga lang] ngayon ang panahon, sobrang busy. [Pero] naiintindihan naman ni daddy ‘yon."

Among the 45, Rowena was hazy as to her number in the chronological order of kids. "All in all, bale hindi ko na alam kung pang-ilan [ako]." She guessed she was probably in the middle.

After some prodding, Rowena revealed that it was not easy to be the one who held the "list". And it does not help that her dad does not put a stop to speculations surrounding the true number of his kids.

"Sinasabi ko nga, ‘Daddy kung may maghabol diyan, ah! Kawawa naman kami d'yan. Kawawa ka d'yan.' Tapos tatawa lang yun," she narrated, adding that there are still fellows who approach them and claim they are Revillas (or rather, Bautistas).

There was one time when somebody was so insistent that he was a child of Ramon but the patriarch did not believe him one bit. "'Yon, nagkasakit, tinulungan ko [na din] basta sabi ko, ‘Stop calling me na lang Ate. Tutulungan kita'. [Iniisip ko] daddy ko nga, di [siya] inaa-acknowledge, ako pa?"

The Revillas are actually prone to abuse. At one point, Ramon Revilla Sr. decided to supply a specimen of his DNA to the National Bureau of Investigation (NBI) so that those who might run after him for paternity could just submit samples of their DNA to test against his own sample.

ADVERTISEMENT - CONTINUE READING BELOW ↓
Last September 30, news broke that the elder Revilla suffered a stroke and was in critical condition. He underwent surgery on a clogged vein in the brain but is now recuperating.

Before the incident, sisters Rowena and Andrea were very vocal that their dad still had a lot of things he has to do, things to accomplish. "Nakakapagtrabaho pa siya. He's the chairman of the board sa Public Reclamation Authority (PRA)," Andrea related.

Ramon Revilla Sr., as chair of PRA, has not finished his plans to reclaim the coastal areas along Manila Bay and has yet to still encourage business opportunities at Sangley Point in Cavite. He aims to transform the former US Naval Station into an international logistics hub in Southern Tagalog Region.

For Andrea, who looks forward to again producing films under the family's Imus production, and Rowena, who heads the family business, JAB Realty and Development Corporation, there are a lot more things in store for their beloved father.

ADVERTISEMENT - CONTINUE READING BELOW ↓
True enough, for a man who has weathered a lot of storms—and, yes, had sired 45 kids—it's not hard to think that he still has lots of fight in him.
Read Next
Read More Stories About
Ramon Revilla, Andrea Bautista, Rowena Bautista
Celebrity Updates