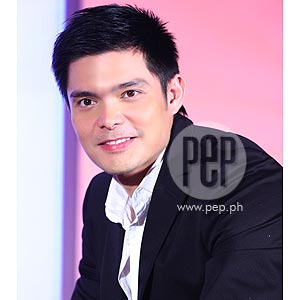 When asked who his partner will be in his next project after Dyesebel, Dingdong Dantes answered, "I do not know yet, but I would say na I'd love to have Marian [Rivera] as my partner."

It's unusual to see two of the most popular hunky actors from rival networks in one project. But Dingdong Dantes and Piolo Pascual made it happen today, September 18, at the launching of Pond's Pinkish White Dream Date at the Ruby Ballroom of Crowne Plaza Galleria Hotel in Ortigas Center, Pasig City.

Since this was a rare chance to work with other celebrities who are very much identified with the other network, Dingdong said, "Sa akin, it's really a privilege."

With this statement, Dingdong was asked in a separate interview if he is open to the idea of working with Piolo in a movie project. "That would be a very nice idea!" he exclaimed.

Dingdong said that it would be okay if their respective film companies—Star Cinema for Piolo and GMA Films for Dingdong—would be able to bring celebrities from their stable together in one project again, just like what happened in For the First Time and another planned movie for Kapuso Richard Gutierrez and Kapamilya KC Concepcion.

What kind of role would he want to portray if this "dream" materializes?

ENDING OF DYESEBEL.Right now, Dingdong is still busy taping for Dyesebel, which will end in October. When asked about this, Dingdong could not hide his feelings. "Nalulungkot ako dahil malapit nang matapos ang Dyesebel," he said.

But what can he say about Codename: Asero topping Dyesebel for one night in the ratings game?

Dingdong frankly answered, "Alam niyo, ratings really, hindi isyu sa akin 'yon, e. Although I get the ratings everyday, pero... To some, maaaring basis 'yon for success, pero sa akin, it's how I enjoy my job.

"At the end of the day, it's how people approach me and they like the show. Kahit na sabihin mong tatlong tao lang 'yon, pero 'yong impact namin sa kanila ay kakaiba, it's all that matters. It's more significant than the numbers din."

MOVIE WITH MARIAN RIVERA. The 28-year-old actor said that he has no idea yet about his next television project, but "I'm looking forward to the movie that we're [he and Marian Rivera] gonna do."

The said movie, according to Dingdong, will be shown this year. So is it true that it will be competing with Piolo's movie with Angel Locsin?

"JOLOGS." "I hate the word jologs. "This was the initial reaction of Dingdong Dantes when PEP (Philippine Entertainment Portal) told him how people tag his onscreen partner Marian Rivera.

In an article published in PEP (Philippine Entertainment Portal) last Tuesday, September 16, Marian accepted the opinion of people who thought that she acted like a "jologs" during their birthday concert at the Araneta Coliseum last month.

If Marian took it lightly, Dingdong is serious in defending his leading lady. "It's very politically incorrect, di ba?" he said. "Whatever, pero I don't believe in that, e. I just believe she is herself, she enjoys life, and kung sino man siya, I respect her. I don't see anyone as jologs... I mean, jologs, the terms jologs kasi doesn't exist for me."
Read Next
Read More Stories About
Dingdong Dantes, Dyesebel, Marian Rivera, Piolo Pascual
Post a Comment
Featured
Latest Stories
Trending in Summit Media Network