Tonyboy Cojuangco did not kick out Gretchen Barretto — PEP sources 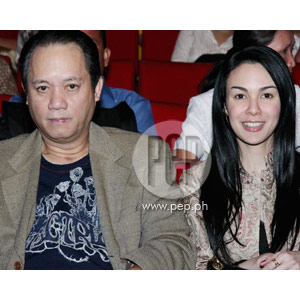 PEP sources say rumor that Gretchen Barretto was thrown out of the Dasmariñas mansion by her longtime partner Tonyboy Cojuangco is not true.

"She is still there and she never left."

This was the information that PEP (Philippine Entertainment Portal) gathered from three different sources about Gretchen Barretto, who was recently rumored to have been thrown out of the Dasmariñas mansion by her longtime partner Tonyboy Cojuangco.

In his column published last Friday, September 19, Philippine Star entertainment editor Ricky Lo wrote that Gretchen "was packing her things and leaving the mansion in [Dasmariñas] which she and her beloved Tonyboy Cojuangco and their daughter Dominique have been sharing even during these past turbulent years."

According to Ricky's source, "Tonyboy drove her [Gretchen] away."

Curious to find out more, PEP dug into its sources over the next three days. All three reliable sources know and are known to Tonyboy and Gretchen. In separate interviews, each one of the three sources confirmed that Gretchen never packed up her bags, nor did Tony tell her to leave.

One source said, "In the first place, Tony is not the kind to kick anybody out. He's really mabait."

The second source said, "What news it that? She's still there."

Finally, a third source today said, "As far as their friends know, they're still in one house. Pero parang hindi nagpapansinan."

Our sources also say that no big fight happened recently between the couple.

Startalk also reported last Saturday, September 21, that Gretchen herself denied the report in a phone conversation with her business manager Boy Abunda. She said, "Tony and I are okay. I did not leave home."

This year began with talks that Gretchen and Tonyboy, who have been together for close to 14 years, were on the verge of separating because of the alleged affair between Gretchen and businessman Dody Puno.

A few weeks after this report came out, Gretchen showed up at Senator Jinggoy Estrada's birthday party last February 16, held at the Blue Leaf Events Pavillion in Taguig City, with Tonyboy.

"Ganito ba yung mga pinalayas?" Gretchen teased the press. She was referring of course to the rumor that she had been told by Tonyboy to pack her bags. The business magnate reportedly had enough of Gretchen's alleged affair with Dody.

These rumors came after a series of sightings, which said that Gretchen had been with some men in varying degrees of intimacy. In this order: actor John Estrada, when photos published on the Internet and aired on TV showed them kissing; government official Dody Puno, who was seen with her at several high-end places like Serendra, Bonifacio High Streets, and the Puno-owned Alchemy; and businessman Ricky Yabut, who was allegedly seen at a pricey restaurant with Gretchen in a very cozy set-up.

Following these, there is buzz of an affair between Gretchen and the government official, which has remained constant. Tonyboy is supposed to know about these rumors, but for unexplained reasons, has not made a move against his partner. The speculation is that he cannot offer marriage, and that Dody has.

The other speculation is that Gretchen has made amends to Tony, and is now playing the dutiful mistress.

However, one of our sources has a simpler explanation. "Tony simply loves Gretchen."