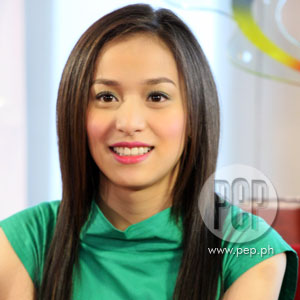 A vibrant and healthy-looking Cristine Reyes faced the media yesterday, September 25, during the press conference of Banana Split at the 9501 restaurant at the ABS-CBN compound in Quezon City.

Although she had bruises on her arms, Cristine explained that they were the result of the injections that were given to her at St. Luke's Hospital where she was confined from September 22 to September 24.

Why was she hospitalized?

Cristine mentioned that her solo show on ABS-CBN will be aired in 2009.

Is it true that they had to reshoot some scenes of Eva Fonda because management was dissatisfied with the material?

ON HER FORMER BEAU. How did she cope after her breakup with Dennis Trillo.

What was their reason for calling it quits?

Is it true that they became jealous of other people while they were in a relationship? Dennis is still being linked to his former girlfriend Carlene Aguilar (the mother of his son) while Cristine was once linked to Wowowee host Willie Revillame.

She and Dennis have been a couple for over a year. How does she cope after their breakup?

Did she feel jealous when she learned that Dennis made out with his Italian co-star Andrea de Lugo during the promotion of the GMA Films movie I.T.A.L.Y.?

Is she open to the idea of reconciling with Dennis?

Is she also open to accepting suitors now?

Cristine admits that she still communicates with her ex-boyfriend. In fact, he asked her if the suicide rumor was true.

FUTURE ENTREPRENEUR. The younger sister of Ara Mina is now thinking of being an entrepreneur herself. Ara is known for food establishments such as Osterio88 and Café Mina.