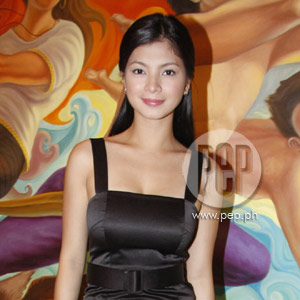 October 2003 may be memorable for the ex-Kapuso, now Kapamilya star, Angel Locsin. It was in this month and year that FHM magazine invited the then Click star to be their sexy cover girl for the first time.

The newbie Angel, who must have owed some of her great physique to being top swimmer from grade school to high school, was hailed in 2003 as the 10th sexiest Pinay by the popular men’s magazine.

Little did anyone know that in two years’ time, she would rank number one.

In October 2005, FHM again placed Ms Locsin on its glossy cover. And she was more than worthy of the banner page this time—she had the plum spot as FHM’s sexiest Pinay. From tenth spot to sixth in 2004, Angel Locsin made 2005 her year in the FHM list. It was no small feat.

At 18 when FHM first discovered her as its cover girl, aside from Click, Angel was virtually a neophyte in the entertainment industry. Her meager claim to fame came from being cast as Richard Gomez’s daughter in the movie Ang Iibigin Ay Ikaw and from modeling for a 30-second Johnson’s Baby Cologne commercial.

So what made the difference? Her high-flying career, that’s what.

Angel Locsin soared to new career heights via her character Alwina in the first-ever local fanteserye, the 2004’s hit, Mulawin. As a winged creature, she garnered a lot of fans—men, women, adults and tykes—and became a household name.

Giving Angel more popularity was her reprisal of Mars Ravelo’s beloved Darna character in 2005. If Alwina gave her the skies, Darna gave her the galaxy. Angel Locsin, then a GMA-7 Kapuso star, became unbelievably famous; no one at that point could have contested her as being the hottest young star.

In her 2005 FHM interview, she enthused: “In all honesty, hindi na talaga ako nagaambisyon pa nang higit sa kinatatayuan ko ngayon. I’m perfectly happy and contented with the blessings that are coming my way now.

Born Angelica Colmenares on April 23, 1985 in Bulacan, her parents separated when she was 14. The young Angel was discovered when she was out malling with friends.

Forward a few years, she was a big star.

The Angel or Darna frenzy actually reached a point where the actress’s likeness as the superheroine could be bought in malls and tiangges alike. Her TV series, Darna, broke records in the ratings game with AGB and AC Nielsen reporting a 52.1 share for Darna, the highest that a show has ever reached so far.

Fame, by far, was not finished with Angel.

After Darna ended in 2006, GMA-7 gave her the role Sabina in Majika. Another telefantasya, it was another hit for the young star who at that point could seem to do nothing wrong.

In the series, Asian Treasures in early 2007, Angel was bestowed a spot in the high leagues as she played a character opposite veteran action star Robin Padilla.

She confessed, “I love what I do so I really don’t feel weighed down by work. To me, without Mulawin and Darna, wala po ako rito ngayon.”

But in March 2007, when Angel’s exclusive contract with GMA-7 expired, the star opted to move to the competition.

Angel’s move, if only it could have been as easy as shouting ‘Darna’, became highly controversial because of the following factors: she was GMA-7’s number one girl with her shows raking in the ratings, Angel helped the rumors to fester by keeping mum about her stand in the beginning, and, the eventual move was to GMA-7’s biggest rival, ABS-CBN.

From Kapuso to Kapamilya, Angel began her journey in her new network in January 2008 when her teleserye with Piolo Pascual, Lobo, debuted. She also guested in several Kapamilya shows, like in Kris Aquino’s Deal or No Deal, The Buzz, and even in Pinoy Big Brother as a guest housemate.

Spreading her wings, after trying the hat of Producer in the film, Angels, she tried her hand at entrepreneurship. She now has AngelActive, the fashion line she has put up as a product of her fashion studies in London [Central Saint Martins College of Arts and Design, UK]. The line offers lifestyle wear for active women.

But it has yet to again be a sweet and soaring life for Angel Locsin, given that her 2007 network shift has given her more controversies than ever.

The supposed rivalry escalated when in July of this year, Marian Rivera was crowned number one sexiest Pinay by FHM, the same magazine that bequeathed Angel Locsin the same honor in 2005. This year, Angel only came in at fourth place.

Despite detractors and the intrigues that hound her, Angel hopes that the best times are still ahead of her.

Lately, she has been linked with Luis Manzano, who once commented when asked about her, “Si Angel ay isang babaeng karapat-dapat pakasalan.”

Her lovelife seems to be in full bloom, much like her career. She is busy wrapping up her movie with Piolo Pascual, Land Down Under, which will be shown this November.

"I don't really make long-term plans," Angel related. "I'm not the type who will think about what will happen to me in five years. But with everything I'm doing now, binibigay ko ang 110 percent ko. So hindi ako natatakot kung sa'n man ako mapunta because I always give my best."