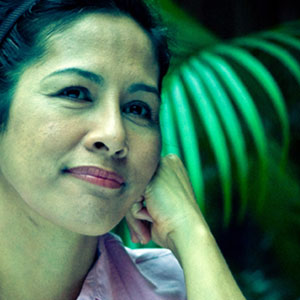 "Late 2006, I was diagnosed with stage 2 cancer," former actress Lara Melissa de Leon-Joseph related. She is now cancer free and is presently helping other cancer victims through their disease via her own support group Project Pink.

Lara Melissa de Leon-Joseph was active in showbiz in the ‘90s until she was eventually diagnosed with breast cancer. But today she's brimming with faith and a lot of energy.

"I'm okay, thank God things have been well," she said when PEP (Philippine Entertainment Portal) met up with her at the photo exhibit and launching of Everyday Warriors , an inspiring compilation of photos and stories of breast cancer survivors.

Melissa is one of the women featured in the book. Indeed, she has overcome her trials and constantly invokes her faith in God.

"The Lord has been so good. He carried me through it [and] up to now is carrying me through."

At the event attended by members of the Joy of Living Foundation and Everyday Warriors cancer survivors, Melissa wore a simple black top, light slacks and an aura of calm about her. Nothing in her lovely demeanor would clue you in on her fight against the life-threatening disease.

Well, Melissa always had a strong presence. The markings of a star.

She is the daughter of acting greats Gil de Leon and Lilia Dizon, and sister to equally notable actors Christopher de Leon and Pinky de Leon. Lara Melissa's entry to showbiz in the late ‘80s was as accepted as it was expected of one who belonged to a family of veteran actors.

Showbiz fans would remember her as one of the hosts of the defunct Sunday noontime show, ‘Sang Linggo nAPO Sila. She and other hosts like Bing Loyzaga, Michelle Van Eimeren, Agot, and Amy Perez were like Sunday's sunshine then as they hosted, sang and danced in the variety show top-billed by the APO Hiking Society's Danny Javier, Buboy Garovillo, and Jim Paredes.

Melissa was very much into singing and recording, too. She recorded songs for Octo Arts/EMI Music: "Simple Lang," "Panaginip" and "Samba Song." In fact, the late ‘80s and ‘90s saw Melissa starting what singer Sitti is now popularizing, bossa nova tunes.

Melissa wed her non-showbiz boyfriend Ronald Joseph in 1992. But marriage did not hamper the actress in pursuing her showbiz career. "While I was married I still was active, we still had a show... After, I got into a teleserye, it was with Gina Alajar [as director]," she recalled. Melissa was in the TV series, Narito Ang Puso Ko.

"[That was] right before I was diagnosed...and then after that... I've not really been active."

It was in 2005 that Melissa discovered a lump in her left breast but the doctors discovered it to be benign. The next year was different. "Late 2006, I was diagnosed with stage 2 cancer." Doctors also found that her cancer was the aggressive type, and so her treatment was for stage 4 cancer.

"Early 2007, I started my chemotherapy. It was tough, it was really hard," Melissa revealed.

It was as tough for her whole family when they found out about it. Add to that was the fact that previously, "my sister also had [breast cancer], my sister Toni Abad."

"Of course they were shocked in the beginning. But thank God, the Lord is good. I have a wonderful supportive family, my children [three sons] were all so good and they helped me go through it."

It became a time of soul-searching. And as a converted Christian even before the disease hit, Melissa's religious faith grew stronger even as her body started getting weaker. "Nung una I said, ‘Lord I'm gonna hold on to you' but there was a time that I was so weak, the Lord was the one who held on to me."

She admitted that not only did her condition strengthen her faith, it also made her a better person.

In her testimony before the Word for the World Christian fellowship congregation, Melissa recalled how she was very different before. "May pagkasuplada ako [noon]. Wala akong pakialam sa taong nagmamahal sa akin. I did not care about anything but myself, I was so self-centered. I did not really follow the teachings of my parents...

"But the Lord showed me how good he is and still He gave me a good life."

"I had a choice then," Melissa said. "Either to panic or to pray. I chose to pray. I prayed for Him to take over."

"Thank God I was able to go through it well." And she described the whole experience as "wonderful."

"I always say this to friends whenever we talk about this, I always say these were the best times with my Lord Jesus Christ. I really had a good time with Him while I was going through my treatment and I knew he was going to use me. And thank God He is using me right now. I get to sit down with other survivors, with other cancer patients and I get to speak with people and give a little encouragement. It's the little that I can do for the Lord."

Currently, Melissa is active in sharing the Word of God, attending fellowships, and spreading information about breast cancer. Her advocacy brings her to so many events and places that the former actress is as busy as any other actress around.

She and her friends had seen the need to have a support system in their area, and so they formed Project Pink. "We want to take care of cancer survivors in the south, and Asian Hospital got Project Pink as their cancer support group."

Melissa is also planning to write a book with her sister Toni. "We're planning to [release the] book by next October."

Given her busy schedule, Melissa knows, of course, how to keep away from stress as she knows it is not healthy. Her diet and change in lifestyle are important. "Basta no meat diet and I sleep early now, unlike before and I make sure I drink my vitamins because I didn't use to before."

Being a strong advocate of breast cancer awareness, she stressed: "I would advise women to go through mammogram. Don't get scared of mammogram, even if it's painful... [and] there are places and hospitals that mammograms are not as painful, like there's Medical City..."

As for breast self-examination, "Yes, you do that also but it will be best if you do a yearly mammogram, that's what the doctors say. Early detection is the cure to breast cancer. Kasi if it's kinda late, it's harder to treat."

Breast cancer could hit anyone, she emphasized. "It's either environmental or genetics. It could also be the diet, that's one factor or a lot of things put together. And the cure for it as what all the doctors would say—early detection."

Ask Melissa where her strength comes from and no doubt she would automatically credit her savior Jesus Christ whom she describes as her "Healer, my Rock."

Things are working out so well for her as a leading advocate of breast cancer awareness, does she still consider a return to show business?