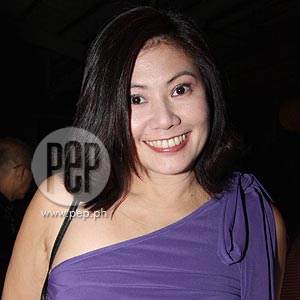 "I'm very okay, very happy and contented," related Jackie Aquino, who used to be very visible in showbiz and now reveals a desire to do more projects. Jackie, who's a cousin of Kris Aquino, may be remembered as the former flame of comedic genius, Roderick Paulate.

Although not as high-profile as her cousin Kris Aquino, in fact, Jackie Aquino is still very much in showbiz circles.

"I'm very okay, very happy and contented," Jackie announced when PEP (Philippine Entertainment Portal) caught up with her at Bong Revilla's birthday bash last September. "I'm a board member of the MTRCB (Movie and Television Review and Classification Board). And I have a talk show every Saturday, 8 pm, it's She Said, She Said with Ms Cutie del Mar, she's the daughter of Congressman Raul del Mar of Cebu. It's in Channel 3 in Destiny Cable."

She also informed PEP that she is part of the cast of the indie movie, Teach Me to Love. "It's under the direction of Eddie Romero, our national artist and it's with Maui Taylor, Tonton Gutierrez and Nathan Lopez."

Jackie Aquino came to fame in the ‘80s, starring in the film opposite action star Bong Revilla, Moises Platon. She also starred in the 1989 international film, Circle of Fear, which was shot here but distributed in the U.S. and Europe.

Many may remember her as once being the girlfriend of comedy star, Roderick Paulate.

These days, though, she is wife to a non-showbiz guy and mother to two adorable daughters. And leading quite a full life, by the looks of it.

"I teach in the Gymboree Play and Music School," Jackie added to her work list. "I'm [also] the PR and Program Director. It's a school for children [aged] zero to five years old, it's a franchise from the US. We have two corporate sites here—one in Shangri-la Mall and in Manila Polo Club in Forbes Park, and we have franchises in West Gate Alabang, in Cebu, Serendra and Trinoma."

She said it's not a problem that her work involves toddlers and babies. "I really love children, I really am patient with them, so even if they cry or vomit, I'm fine with that."

"And, I'm also a mother and a wife," she topped off her many roles.

It must be hard juggling her schedule. Does she ever get to sleep?

"Actually I sleep late—late would be 2 am—and I wake up late. Unless I have taping. I'm used to that kind of life. My normal sleeping hours is 10 hours," she said.

"My classes are at 12, sometimes they're at 4 pm, so it depends, and I can always fix my schedule in school and then with MTRCB, we're required to go 8 times a month plus, like, we have hearings in the senate and congress, so I attend that also," Jackie narrated. "With classic herbs it's distribution so I do it when I can, like if we have to do go out of town, usually on weekends, and then I also try to pick up my children and bring them to school but it's very difficult."

When we brought up the topic about her daughters, Jackie Aquino lit up. "I have 2 daughters, one is 8 and the other one is 2." Her pride and joy are Andrea Martina, who's in Grade 2 at Assumption, and Anika Marella, "Marella is derived from Mary, she was born on Dec. 8. Both [my kids] are natural births."

The hands-on mom admitted that motherhood suits her very well. "I love it. I was being interviewed once and I said it's the best and I guess the most difficult role I've ever played in my life."

"Actually I bring them to work," she related. "'Cause I was breastfeeding until 2 years old so I would bring them to MTRCB, they grew up there. I would breastfeed during my review. And since I also work in Gymboree, they come to work with me. Sometimes I use them as my dolls like if I have to... we use a gymbo doll for level-one class which is 0 to 6 months so I would use my baby. But now of course [they are] running around already."

Is she planning on having a boy?

"No, no more. Two is enough," Jackie said, shaking her head and swearing she is happy with her daughters.

"It's fun!" she quipped, when asked about her nine-year marriage. "I'm married to Mark Gavino, he's from Roxas City, related to the Roxas clan."

Revealing her initial fear to get hitched, she had only gotten rid of her reservation after falling in love with Mark. "We were group mates, we were really friends. [Actually] we would double date with different people. We had common friends, so we would go out together. He would give me a date..."

Until, finally, they discovered they were each other's perfect dates. "We were friends and until now we're friends, which is good. He goes out, I go out, he has his own friends, we have friends together, we play badminton together, I also play badminton separately... So it's good. We trust each other. We can talk about who my crush is, he can talk about who his crush is and it's good."

Jackie glowed with happiness and contentment.

Showbiz dreaming. Jackie was quite upfront about her desire to get into the thick of things in showbiz. She wants to be busy in movies again!

"I guess when I got married, everybody spoke for me," she complained, " like if someone wants to get me for a movie, there's always somebody who says ‘O, she's not interested anymore' when I haven't even been asked. Or they say ‘she's quit' and they bring in their own alagas.

"I don't really have a manager so nobody speaks for me unless it's me. So I've spoken to directors and producers and they would ask ‘O, what happened, why didn't you accept?' And I'm like, nobody ever asked me! There are many stories like that... I [also] lose work because of somebody who's bolder or will show more [skin]..."

In any case, fondly remembering her heyday, Jackie recalled having worked with the King himself, Fernando Poe Jr. "I'm blessed to have worked with him."

"I think Filipinos are movie and TV lovers," Jackie reflected, revealing how positive she is that the film industry will get its second wind and regain its glory. "You can never take that away from them.

"[And] I think it's not only in the film industry, in all aspects, there are many businesses that are closing... I have friends in restaurant businesses that close down."

One solution Jackie could think of to alleviate the down-spiral of the local film industry is for "some people [to] lessen their talent fees and give chances to the others. There are many talented Filipinos!"

"It's very good that there are many indie cines [independent films] that are showing now. It gives work to many people who aren't as active and it gives work to people in showbiz," Jackie pointed out. "If you think about it, there are a lot of actors and actresses that you don't get to hear about, there are people in production who are ‘isang kahig, isang tuka'. And what's sad about it is that you see people who are up there, who are just hanging around for their allowance."

So, would she ever consider producing a movie herself?

Laughing, the former actress quipped: "I'm rich with friends and love, not with money. "