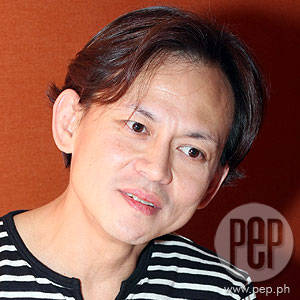 There have been rumors spreading since years back that actor-comedian Jon Santos—the reason why he had been away from mainstream entertainment—had gotten hitched and is now living the life with his spouse.

PEP meets Jon. Looking energized and, yes, radiant, Jon Santos did not look like he had aged a bit after a two-year absence from TV and movies. The funny guy, who has made us laugh and see sense from his impersonations of Cory Aquino, Miriam Santiago, Fidel Ramos, Joseph Estrada, Juan Flavier, Kris Aquino, his personal favorite Vilma Santos, and many others, is back to resurrect his ‘characters'. At the same time, his presence reminds us that comedy is not just fun but eye-opening as well.

Jon is raring to again have a go at it and give his (funny) two-cents worth on the present politics. "Kasi parang recharged ka na naman... at may time ka nang gumanti. Dun lang naman daw tayo nakaka-seek ng konting revenge," he said on his funny attack on serious topics like poverty and corruption.

He admitted to being very fortunate to have a support group who collaborates with him on his materials. "I have this group of friends who have been writing panahon pa ng dorm [namin] sa UP (University of the Philippines), mga UP friends na mga suki na—alam na nila yung habits ng [politicians, celebrities] gamay na gamay na nila."

Aside from his group, Jon also acknowledged his mentors: Tessie Tomas (who gave him his start while he was still a UP student), Willie Nepomuceno, Nanette Inventor, and Mitch Valdez, who have stood by him through the years. "They all welcomed me with open arms, pinag-audition ako, binigyan ako ng hanapbuhay, bubong sa ibabaw ng ulo ko..."

He will soon be seen on TV, in a Judy Ann Santos soap opera, Humingi Ako Sa Langit and this coming November at the Music Museum in a comedy series, Da Spooftacular Showdown with Candy Pangilinan, John Lapus, Pooh, Pokwang, Kim, Vice Ganda and Kaye Brosas.

He is into yoga, he shared. Aside from giving him flexibility, muscle control and a fit body, yoga has helped relieve him of stress. "I alternate with gym. Fortunately, natanggal ko pagso-smoke. I was a social smoker for some time, pero a decade ago na."

True enough, a lot of things have changed in Jon's life. The two years he was away from the limelight, he said he spent at a desk in an office, "I was Ortigas-based. Ortigas ang tirahan, Ortigas ang trabaho, I did not even drive. Sa acting, there were the tours, corporate shows... seasonal e, a third of the year lang ang intense, corporate shows. I was also in [the Peque Gallaga film] Hubad ... And I was also busy setting up the household thing."

So are his domestic activities a clue to his new status? Is he married?

Jon Santos and love. It need not be asked of Jon if he was in love. Judging from his glow and the telling smile, he was. Is. But did he really tie the knot with someone?

Jon Santos and partner, West Stewart, sealed their love in civil rites on August 24, 2005 at the North York Family Court in Toronto, Ontario. Ontario is one of the eight provinces in Canada that allows same-sex marriages.

Although it wasn't love at first sight, the meeting was enough to start a solid friendship that developed into a serious relationship.

In July 2005, West proposed. "On one knee," Jon relayed, reliving the moment and revealing that though there were no tears, he had felt certain West was the One and he gave him his, "Yes, I will."

"Sometimes when you are very, very sure of something, you heave a sigh and, ‘Oh my goodness, I've never been so sure about anything."

His and West's certainty translated to an exchange of vows, with the spouses both wearing suits and exchanging rings they bought for each other. "'Yung rings, KKB (kanya-kanyang bayad). Binili ko yung kanya, binili niya yung akin."

But nothing untoward happened. The couple honeymooned in San Francisco right after.

Other than in Canada, specifically in the Philippines and the laws governing the country, the civil union is not binding and null.

And it wasn't that he was hiding his ‘new status' from the public, it was just because there was no opportunity to divulge it as he was not that active in showbiz then, he explained. "May mga times na it feels so ordinary. May mga times na parang nakaka-culture shock i-share or even i-discuss, ‘asa sa inyo na iyon.

Indeed, Jon is in love and his family is happy about it. "[West is] a great man with a great heart, napakabuting tao... di ba mararamdaman mo naman kung pareho kayo ng mga goals, pareho kayong naghahanap na mag-settle down?"

"When you talk about the not-so romantic things and when you go through things that are not so convenient, tulad ng pagod ka galing ng taping tapos di ka nakapagiwan ng iiniting ulam, you must be in a good place... I think you are probably doing things families are doing. I'm 43, he's 53, probably wala ng golden [anniversary] eto, so suwerte na mag-silver, di ba."

What does he love most about West?

The naughty question: Did he plan on getting pregnant?

Welcome, Jon. As the political climate heats up, what with the 2010 elections fast approaching, Jon Santos's brand of comedy will slowly but surely become very popular again. In effect, Jon Santos's career will get its own steam. He's very back in the showbiz ballgame again!

With his latest shift as the newest talent of Arnold Vegafria, expect a lot of buzz from the comedian soon.

Jon related that his life in the past two years had been half of the year living in the country, and half in the U.S. Getting back to mainstream entertainment might change that.

No doubt many are anticipating Jon's comedy. Filipinos need a good laugh.