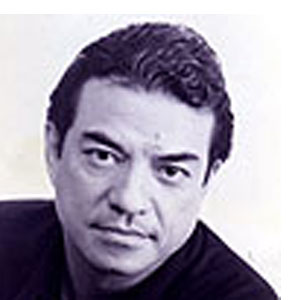 The late Ric Segreto, who popularized the songs Lovin' You and Give Me A Chance, was one of a number of celebrities who met an untimely death. The musician died in a motorcycle accident.

This year, let us add to the list. Two celebrities died in motorcycle accidents, three in separate vehicular collisions, two succumbed to disease, two committed suicide, and one was murdered. Their sad and tragic end shocked the public, if not the whole country, at the time. Today we heave a sigh of regret at their passing and remember them as they deserve. May they rest in peace.

RIC SEGRETO. The music genius whose first hit, Kahit Konting Pagtingin, earned him a good following was of Italian, American and Filipino descent. He was sosyal, a mestizo. That gave him an edge with the ladies. It did not hurt that he was really a good composer and singer, too. He was friends with Jim Paredes of the Apo Hiking Society, and musically-inclined people surrounded him. His parents—a dietician and a surgeon—loved music as well. He eventually formed a band with his brother.

But it was his heart-wrenching hits that gave Ric a place in the hearts of Pinoys. In fact, his tunes, which include Don't Know What To Do (Don't Know What To Say), Give Me A Chance and Lovin' You are still immortalized to this day in romantic movies.

Unfortunately, unlike his songs that have survived the times, Ric Segreto met an early death on September 6, 1998. It was a motorcycle accident that killed him while he was traversing (some reports say he was speeding) the Buendia flyover in Makati. Reports revealed that the area where the fatal accident occurred was under construction. The popular crooner was found amid the rubble and iron grills. He died of severe head injuries at 46.

JAY ILAGAN. The son of Sampaguita star Corazon Noble and director Angel Esmeralda started out as a child actor, originally using "Angel" as his screen name.

Born Julius Abad Ilagan on January 20, 1953, his good looks eventually made him a matinee idol, starring in the films Maruja (1967), Tubog Sa Ginto (1970), Pinoy Crazy Boys (1974), and Hinog Sa Pilit. And because the looks came with deep talent, Jay survived the transition from teen star to adult actor-winning a Gawad Urian Best Supporting Actor trophy in 1982 for the movie, Kisapmata, another Gawad Urian Best Actor in 1985 for his role in Sister Stella L, and 1988 FAMAS and Film Academy of the Philippines Best Actor for his acting in Maging Akin Ka Lamang.

His acting was not confined to drama. Jay was later known as a funny guy, being one of the Bad Bananas gang with Christopher de Leon, Johnny Delgado and Edgar Mortiz.

In his personal life, he married actress Hilda Koronel but they eventually separated, and he and actress Amy Austria would live-in together. Jay had remained with Amy until his sudden death on February 3, 1992. On that fateful night in Quezon City, Jay lost control of his motorcycle and skidded to his death. Reports claimed that the actor was not wearing a protective helmet. He was 39.

JONJON HERNANDEZ. Tall, fair and handsome, Jonjon Hernandez was a showbiz shoo-in. He had showbiz lineage, being the son of veteran actress Alicia Alonzo and character actor Ross Rival. His dad, the late Ross Rival was from the famous Salvador clan—he was the brother of Phillip Salvador and the father of teen actress, Maja Salvador.

As a child star, Jonjon appeared in several commercials and cameos in movies but he shot to fame as a teenager in the film, Bagets 2 where he shared stellar billing with Aga Muhlach, William Martinez, Herbert Bautista, Raymond Lauchengco, Francis Magalona, JC Bonnin and Ramon Christopher. His popularity rose another notch when he joined the teen show, That's Entertainment. He was part of the show's Thursday Group that included Lea Salonga, Herbert and Ian Veneracion, among others. A romantic link with Lotlot de Leon helped his career, too.

Jonjon was cast in several action films including: Pita, Terror ng Kaloocan and Patapon in 1993. But in the late ‘90s, after reaching a respectable level of popularity, his showbiz visibility dwindled. Later it would be revealed that he had concentrated on his personal life.

In 2000, news would spread like wildfire that Jonjon, while in a car with friends heading home from an out of town trip, had hit a concrete obstruction in an unlit part of a highway, causing his untimely demise.

His remains were interred at the Loyola Memorial Park, where other celebrities had been laid to rest, like Julie Vega and Jay Ilagan.

MIGUEL RODRIGUEZ. A handsome hunk with features that made him look a bit like "Superman" Christopher Reeve, Miguel Rodriguez gave Richard Gomez a run for his money. Actually, the two were once cast together in the sitcom, Palibhasa Lalake with Joey Marquez completing the wackiness.

Miguel was leading-man material, paired opposite the likes of Sharon Cuneta and Snooky Serna. In 1989, he even had three leading ladies in the movie inspired by a popular song, Si Aida, o Si Lorna o si Fe.

Although not as in-demand in the mid-‘90s as he was in the late ‘80s, Miguel was still one of the hot guys, appearing in the Dawn Zulueta starrer, The Maggie dela Riva Story (1994) and Kris Aquino's Saan Ako Nagkamali (1995) His last movie was Huwag Mong Isuko ang Laban in 1996.

In early 1997, the nation was shocked about reports that actor Miguel Rodriguez had been found dead by a household help at his home in BF Homes, Las Pinas. Although speculations ran amok as to the cause of his demise, it was later reported that the actor died of collapsed pancreas. Many refer to the said cause of death, although based on local folklore, as bangungot.

RENE REQUIESTAS. He was very funny, though it was a bit sad that he had achieved his popularity by making fun of his looks. Rene Requiestas was famous for his disturbingly huge eyes, toothless grin and his line: "Cheetae, gande lalake," to which an echo would always follow: "Ulol! Sinungaling! Panget, Panget, Panget!"

Though most would remember him as Joey de Leon's sidekick Cheetae in Starzan or Pido to Kris Aquino's Dida, Rene was actually a veteran theater actor before he entered show business. His life was the classic rags to riches story, starting out as a cigarette vendor and rising to fame as a leading man to Alice Dixson, Maricel Laxa and, yes, Kris Aquino.

His brand of comedy ranged from toilet humor to the absurdly wacky. Sometimes, he even crossed the line of decency with out-of-this-world jokes but still he was beloved by viewers. He looked like your everyday guy on the street and that endeared him to the masses.

He succumbed on July 24, 1993 to tuberculosis and complications brought about by alcohol abuse and smoking. He was just 36.

CLAUDIA ZOBEL, HALINA PEREZ AND PEPSI PALOMA. These actresses had three things in common: they were all very beautiful, they all shot to fame because of their daring and boldness onscreen—and they all died abruptly in their youth, before they could really make a mark in their showbiz careers.

Claudia Zobel's death affected many people because it happened only months after she was ‘celebrated' for her gutsiness to disrobe in her movies and for showing some acting chops worthy of a seasoned actress.

Her performance in the movies Uhaw sa Pagibig (1983) and Shame, Sinner or Saint (1984), and Lino Brocka's Bayan Ko: Kapit sa Patalim (1985) proved the morena beauty a convincing actress. But just before she could be taken seriously as an actress, her dreams were cut short by a fatal car accident in December 1986.

Halina Perez, although belonging to a later generation, also died in a vehicular accident after returning from a gig in Camarines Sur. She and five others were in an SUV when it hit a container van. Reports indicated that the actress was still breathing when rescuers pulled her out of the smashed vehicle but she was pronounced dead on arrival (DOA) at the hospital.

Pepsi Paloma's death, on the other hand, was the most tragic of the three (if it's possible at all to compare misfortunes). The Filipino-American starlet, reportedly of minor age, committed suicide by hanging herself. She was one of the three soft drink beauties (Coca Nicolas and Sarsi Emmanuelle were the other two).

MA. THERESA CARLSON. She was lovely and had a natural charm about her. Ma. Theresa Carlson's first taste of applause was when she won the Ms Young Philippines in 1979. Show business was not slow to pluck the beautiful Fil-American. She was later seen in the sitcom Chicks to Chicks, making the audience laugh with her broken English and her winning line: "Si ako, Si ikaw."

Fair, tall and lovely, she was fairly in demand at that point. But most of all, she was a natural comic, the reason why she was partnered with comedian Chiquito in Six Million Centavo Man (1980) and Mga Alagad ng Kuwadradong Mesa (1983).

When she met and fell in love with politician Rodolfo Farinas, the 19-year old actress's career slowed down and later halted altogether. Theresa left showbiz to be a wife and mother. And nothing would be heard from her for a time.

Only in 1996 was she again in the headlines after she reported that she was a battered wife in a written letter to Sen. Leticia Shahani. But when every media entity and women's organization was ready to help her, Theresa retracted her story and claimed that she only said her statements out of insecurity as she was then pregnant.

In November 2001, the mother of six fell from the 23rd floor of the Platinum 2000 condominium in Greenhills, San Juan. Police ruled it as suicide, despite initially speculating murder.

Another life and death shrouded in mystery.

ELVIRA MANAHAN. Many may have a hard time remembering this fashion icon but during her heyday, no social function was ever complete without her on the list.

She was always described as the life of the party—smart, witty, unconventional. The socialite Elvira Manahan was always expected to do the unexpected. She was popular for it.

Also famous for her infectious laughter, she was the host of Two for the Road, together with entertainment columnist Nestor Torre. To understand how on top of the game she was during her time, no celebrity—local or foreign—could refuse to be interviewed by her.

Aside from hosting, she took a shot at acting in the 1981 film Burgis, which starred the young Gabby Concepcion.

Widowed at 17 and mother to Mandy Eduque Jr. at 18, Elvira remarried that same year. Her marriage with Dr. Constantino Manahan produced two sons, Johnny and Bonggoy. Johnny Manahan is now an executive and TV director in ABS-CBN.

Elvira's winsome life and laughter ended in tragedy, October 1986, when she was shot in the head at her own Forbes Park home. The other fatalities were three household helpers of the Manahans. Reports were that the assassin was a certain realtor named Jaime Balatbat.

Speculations and rumors were rife after Elvira's death but, to this day, not one has been verified as true. Suffice it to say that her passing was so abrupt, people wondered how a woman so full of life could meet an ending so violent.

The List gives but a glimpse into the tragic stories. Each celebrity had his or her share of rumors and speculations surrounding their deaths. Would you know more details?