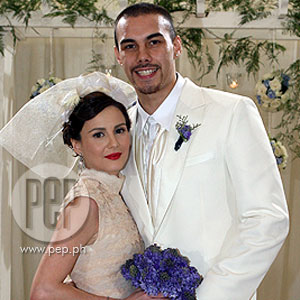 Last June 26, Cheska Garcia told PEP: "I’m getting married to the man I love. That’s all that matters. It’s not what the wedding is gonna be in one whole day. It’s the rest of your life with this person. I’m so excited!" Finally, that important day arrived.

One summer in Boracay, Douglas Kramer met Francesca Marie Garcia. Their closest friends would say, it was "love at first sight" for the cager. For the actress's part, she was "mesmerized."

October 9, 2003, marked the day when the two officially became a couple. A year later, a realization struck the Us Girls host. In a previous interview with PEP (Philippine Entertainment Portal), she related: "On the second year that Doug and I were together, I knew that he was the one."

"I asked him what was he doing there and he went, ‘I came here to surprise you,' which was very Doug because he always surprises me with stuff and everything.

"He went down on one knee and said, ‘Be mine forever. Will you marry me?' I was giggling the whole time because I couldn't believe what was going on and I said, ‘Yes,' and he said, ‘I love you,' and I said, ‘Thank you.'"

October 9, 2008, which was their fifth anniversary, became their grandest and most wonderful day. Cheska and Doug tied the knot at the Blue Leaf Events Place in McKinley Hill, Taguig City.

In a modern Spanish-themed wedding, more than 400 people witnessed the couple's exchange of "I dos."

It was the groom's turn to be "mesmerized" the moment Cheska began walking down the aisle with her dad, Francisco Garcia. The bridal gown was designed by Puey Quiñones gown, while her bridal glow was enhanced by make-up artist Juan Sarte.

And it was the crowd's turn to be mesmerized when the lovebirds recited their vows:

Cheska: "Doug, the day I met you was the day I met my true love. You're everything I wanted, someone I talk to, laugh with, have a quiet time with... You're my confidant, someone to share my dreams with, and most of all, my number one fan.

"I knew when we got together, that you were the one for me. I could never imagine a day without you. Today, my fairy dream has begun and my prince is now my king."

Doug: "I love you. You are my best friend. You're my partner in everything I do. Today I give myself to you in marriage.

"Your tantrums are out of this world, but I would painfully, gladly, put up with it, because you're my comfort, my partner, my best friend, my confidant, and my number one cheer leader. These things I give to you today, all the days of our life. I love you."

The wedding, which was greeted by a heavy downpour, ended with a grand fireworks display.


Click HERE to view photos of the Garcia-Kramer nuptial.