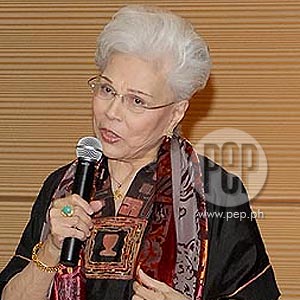 When asked about her age, Armida Siguion-Reyna proudly answered, "I'm 78." But her closest friends would certainly disagree and say, she just turned "18," because her zest for life has not dwindled at all. In fact, she wishes, "Hindi magbago yung aking passion sa lahat ng ginagawa ko..."

Armida Siguion-Reyna, who was born on November 4, 1930, celebrated her "18th" birthday last November 6, at the Tangerine Mediterranean Restaurant in Greenhills, San Juan.

The birthday lady, who was once dubbed the "Dragon Lady of Philippine Cinema," looked every inch the señora with her regal bearing and understated elegance in attire and jewelry. Even her cane was stylish.

Armida Siguion-Reyna is best remembered by her peer generation for her TV program in the '70s, Aawitan Kita that won several awards and crowned her "Reyna ng Kundiman." Aside from her other albums, her songs have been put together in a 2-volume, 24-track album titled Aawitan Kita (2008).

She is also the former chairperson of the Movie and Television Review and Classification Board (MTRCB). As a movie producer she heads Reyna Films, which made several films in the '90s. She has won FAMAS and Urian awards as Best Suporting Actress, topping her achievements with the 2006 FAMAS Lifetime Achievement Award.

She may have become less visible in the entertainment scene, but the movie producer-singer-actress still has the ability to summon the Who's Who in politics and showbiz.

THE GUESTS. In one corner of the room, Diamond Star Maricel Soriano cracked jokes with Mother Lily Monteverde of Regal Films, and the big bosses of T.A.P.E.—Tony Tuviera and Malou Choa-Fagar.

Armida's son, director Carlitos Siguion-Reyna, shared a table with Mary Grace Poe-Llamanzares and husband Neil Llamanzares. It was also the birthday of Direk Carlitos that night but he's used to people remembering November 4 as his mom's birthday.

JAMMING WITH TITA MIDZ. The dinner party turned into a "live" version of Aawitan Kita, the television program which made Armida Siguion-Reyna famous over 30 years ago.

Pilita Corrales, Asia's Queen of Songs, who regularly sings at Tangerine, formally opened the jamming session with hits like "You've Got A Friend," "Sayang," "Tukso, Layuan Mo Ako," among others.

Even Sen Enrile (who can imagine the veteran lawmaker singing?) was obliged to join Ms. Pilita in rendering a duet of "Usahay."

Ricky Davao, who said he was "not prepared" to perform that night, belted out two songs. One was a Tagalog version of the 1949 classic "My Foolish Heart."

THE FEAST. The rest of the night was spent chatting—with topics ranging from Hihintayin Kita Sa Langit days of Richard to funny names of ordinary people, including, showbiz news—and, of course, food!

The intimate birthday dinner celebrated 78 colorful years of a vibrant lady who's a class on her own in the entertainment industry. "Nag-iisa lang talaga ang Armida."