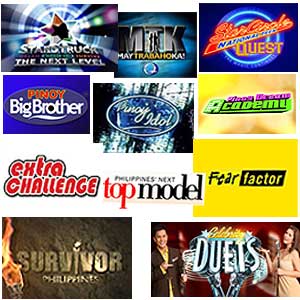 There are more than 40 reality-based shows in the list, but only a few can be described as "phenomenal." Until when are we going to get caught up in the craze?

It was early 2000 when the term "reality television" was coined in the U.S. Top-rating shows Survivor and American Idol dominated the television scene. Soon the Philippines caught the realiTV fever.

Pasok at patok would best describe the response of Pinoys to the craze.

For the longest time, TV series had reigned supreme in the primetime block of both GMA-7 and ABS-CBN. But in 2003, Extra Challenge provided the viewers with an entirely different dish in the show menu.

Celebrities would react impulsively or instinctively. Sometimes they'd argue, cry, and even curse.

People liked the idea of seeing their idols in a natural setting.

The stars would participate in the challenges sans makeup, their signature clothes, and alalays. They would be told to perform tasks that ordinary people do for a living and even do the extraordinary things that some ordinary people can do.

People liked the idea of being involved.

The new format gave Extra Challenge some flexibility. If we were to recount all its episodes, it had a bit of everything reality-based in the U.S.—from Amazing Race to Fear Factor to Survivor to Simple Life to The Bachelor, among others.

From here, more reality shows sprouted in local television. There are more than 40 in the list, but let us pay attention to the ones which successfully invaded majority of Philippine households.

We set the following guidelines in choosing the shows for this list: (1) they present real-life, unscripted situations (2) and/ or they document actual events (3) and/or they feature ordinary people (4) they got included in the primetime block.

StarStruck and Star Circle Quest, which were both launched in 2003,had brought instant stardom and millions of pesos to young hopefuls.

For a certain period of time, unknown teens were subjected to rigid training and workshops, including physical and mental challenges. Each week, one would be eliminated. In the end, the one with the most number of text votes from the viewers and with the glowing recommendations of the jury emerge as the victor.

StarStruck became a phenomenon that it aired four seasons. SCQ had two seasons. Both artista search programs even spawned a version for kids.

The Hiccup. Some showbiz veterans expressed their censure on the said shows. The search had become a popularity contest instead of a talent race. It had made things much easier for the newbies to gain ground in showbiz.

Of course, some of them are talented and have honed their craft over the years, but majority are still ordinary faces in the crowd.

In the case of the young kids who joined, it was too shattering for their hopes to be dashed at such an early age. It was also disturbing to know that their mindset would be geared towards joining showbiz so as to improve their quality of life.

But of course, the main proposition of both shows cannot be refuted: In showbiz, you have to dream and believe to survive, and you have to realize that the quest does not end the minute you step out of the search.

Pinoy Big Brother became an instant phenomenon a few weeks after its first episode in 2005. Twelve housemates would stay inside the Bahay ni Kuya and would be monitored 24/7. All of them would undergo challenges, and from time to time, would be required to talk to Kuya in a confessional room.

Initially, it was a humdrum. The housemates then were still in the process of adapting to their new environment. But the minute "troubles," "love angle," and sex-related topics entered the house, Pinoy viewers started welcoming PBB into their homes.

One of them is the censorship issue. MTRCB (Movie and Television Review and Classification Board) deemed some of the scenes and conversations "not suitable for young audience." As a result, the show had its share of warnings and even suspension.

Other issues hurled at the show had to do with casting, the votes, and the working permits of Pinoy housemates who were raised abroad.

But these issues created buzz for the show, thus making the Pinoys feel the presence of Kuya and his housemates.

The Hiccup: Our culture imposed some restrictions on the show. While voyeurism or any content of explicit nature on television are not exactly encouraged, suppressing the actions of the housemates defeat the very purpose of Big Brother.

This had some people asking: Are the housemates acting for real or merely projecting? What's the degree of hype in the show?

Prior to the launch of these local franchise shows, Pinoy Pop Superstar and Star In A Million had already patterned their formats after the popular singing competitions in the U.S. and in Europe—meaning, the contestants were given training, early exposure; the shows' behind-the-scenes were also aired.

But it's different when you're part of a worldwide craze: Fremantle's American Idol and Endemol's Star Academy.

But when GMA-7 bought the rights from Fremantle in 2008, it was Gretchen Espina, from the prominent political clan of Espinas in Biliran, who was acknowledged as the first Idol of the country.

The transfer, from ABC-5 to GMA-7, was deemed a controversial topic among Idol fanatics. Critics claimed that ABC-5 did a better job in treating the show production-wise, while GMA-7 fared way better in terms of promotions and publicity.

The initial episodes of Pinoy Idol were criticized for poor audio and stage set-up, choice of the judges (Wyngard Tracy, Ogie Alcasid, and Jolina Magdangal) and host (Raymond Gutierrez), and selection of the finalist. "Malamya," "sablay," and "trying hard" became the perennial complaints.

Viewers noticed the improvement as the season progressed, but controversy surrounded the show again during finale. Although Gretchen gave an awesome performance, the detractors pointed out that she only managed to be part of top three because of the text votes.

An Academy was built beside the Big Brother House. The scholars were monitored 24/7 and trained by a voice teacher, dance teacher, and even a fitness instructor. The show had more element of drama than Pinoy Idol.

The version for kids, who are called Little Dreamers, underwent the same kind of training on weekends. Twelve of them, whose age ranges from six to ten years old, got their lessons from voice teachers.

The Hiccup: It is the text voting component which elicits negative feedback. The Pinoys' tendency to be biased and clannish gets in the way. In the case of American Idol, the deserving idol gets chosen.

But here, it becomes a matter of who can afford to spend more money on text loads and whose province can commit better support.

Viewers have not yet fully imbibed the craze. And that's the challenge that both shows have yet to accomplish.

Another thing is, the fanfare should be extended even after both shows announce their winners. If they can produce another Regine Velasquez, then we all can conclude that the money spent on the franchise fees and royalty is all worth it.

At present, two reality shows are being aired: the Survivor Philippines and Pinoy Fear Factor.

Survivor has that element of naturalness and is getting a very satisfactory response from the viewing public.

Pinoy Fear Factor, on the other hand, has slightly deviated from the U.S.-version and is off to a promising start.

And if they don't lose their momentum, let's expect the realiTV fever to stay.