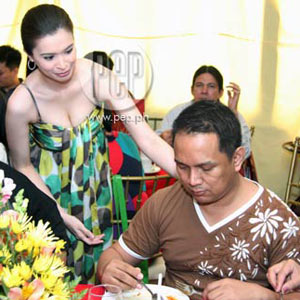 Here's the actual shot of that awkward moment between Sunshine Cruz (left) and PEP blogger Jojo Gabinete (right). Shine probably means well when she approaches the table of Jojo. But the latter is not yet ready.

Entertainment reporters were surprised to see actress Sunshine Cruz during the media junket prepared for the endorsers of Petit Monde last November 21 at Annabel's Restaurant in Tomas Morato, Quezon City.

The wife of Cesar Montano was the first celebrity endorser of the said clothing brand.

Media and press people, including PEP (Philippine Entertainment Portal), seized the opportunity to ask updates about the controversies which surrounded her, and one of them was about the dismissal of the cases she filed against entertainment columnist Jojo Gabinete and her sister in law, Maria Mercedes "Ched" Manhilot-Cantu.

It was June 2008 when the 30-year-old actress filed the libel case against Jojo for writing in his tabloid column the "defamatory" statements of Ched during her television interview with Ricky Lo.

The prosecutor's office junked the case against Jojo due to "insufficiency of evidence amounting to lack of probable cause," but he saw the merit in the libel suit filled against Shine's sister in law. (Click here to read related article )

When pressed on her comment about the prosecutor's decision regarding her case against Ched, she simply said, "Huwag na lang. Basta, whatever ang desisyon ng korte, nirerespeto ko 'yon at nagpapasalamat ako."

With regard to Jojo, the actress stressed she really has no personal issues against the entertainment columnist. "Ever since naman, wala talaga," she assured. She even added, "I just hope na kapag nagkita kami, maging okay naman ang lahat. Kasi, talagang wala, nangyayari lang sa buhay 'yon."

Shortly after this interview, the "encounter" between her and Jojo took place.

PEP saw Sunshine approach the table where Jojo was seated. She gave the entertainment columnist a kiss on the cheek. But the latter did not have any reaction.

After the incident, PEP asked Jojo why he snubbed the actress. The PEP blogger chose to keep mum.