Karylle explains her mysterious smile on "The Buzz" 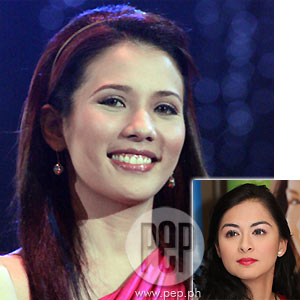 "Parang I was in a no-win situation. If I didn't smile, people would say I was bitter. I was actually trying to figure out what to answer and how to phrase it properly. And then, si Tito Boy suddenly said ‘Thank you!' and ended the interview," says Karylle about her smile that launched a lot of meaning from different viewers of The Buzz last Sunday, December 14.

One of the things that Karylle looked forward to when she decided to transfer from GMA-7 to ABS-CBN was her opportunity to perform with her mother, Divine Diva Zsa Zsa Padilla, in various Kapamilya shows.

Last Sunday, she was able to sing with her mom for the first time in ASAP '08, where she was also given a grand welcome by other Kapamilya stars. Last night, December 16, Karylle performed again with Zsa Zsa during the taping of ABS-CBN's Pasko Na, Kapamilya: The ABS-CBN 55th Anniversary Special at the Araneta Coliseum in Quezon City.

The mother and daughter performed with other celebrity parents and kids, like Gary Valeciano with children Paolo, Gab, and Keana; Pops Fernandez with son Ram; and Kuh Ledesma with daughter Isabella.

Karylle admitted that she was overwhelmed by the greetings she got from her new network family.

"Very, very nice," she commented. "One line I can't forget is my mom saying, ‘Please give the warmest welcome to my daughter Karylle.' And talagang nararamdaman ko yung love at genuine welcome from everybody."

This is just the beginning of working more often with her mom. "Siyempre before we would perform together in a concert and stuff, pero ngayon parang mas madalas na," said Karylle.

"MONA LISA" SMILE. During the short interview, PEP (Philippine Entertainment Portal) also took the opportunity to ask Karylle about the so-called mysterious smile she gave during the "Tough 10 Questions" segment of The Buzz last Sunday, December 14.

She was asked by The Buzz host Boy Abunda, "Buntis ba si Marian Rivera?" Karylle did not utter a word but just smiled. (Click here to read related article.)

Karylle explained her side to entertainment columnist Ricky Lo, which was published yesterday on Philippine Star.

"If there were any misinterpretations of my smile, I clarified it [yesterday] morning when I guested on Boy & Kris. Tito Boy [Abunda] even apologized for asking me [that question]. Tita Kris [Aquino] said kasi that it was politically incorrect for him to ask me. I just explained that no matter what I would answer or however my face would react, it would mean something.

"Parang I was in a no-win situation. If I didn't smile, people would say I was bitter. I was actually trying to figure out what to answer and how to phrase it properly. And then, si Tito Boy suddenly said ‘Thank you!' and ended the interview," Karylle explained.
Read Next
Read More Stories About
Karylle, Dingdong Dantes, Marian Rivera, ABS-CBN, ASAP, The Buzz
Post a Comment
Featured
Latest Stories
Trending in Summit Media Network