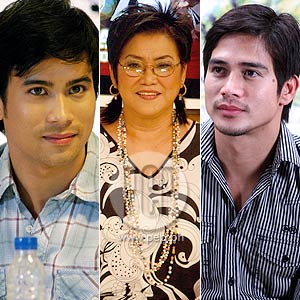 Several well-known personalities finally ended their conflicts last year. Among these headline makers were Lolit Solis, veteran columnist and talent manager, who ended her rift with heartthrobs Piolo Pascual and Sam Milby. The two actors dropped the P12-million libel suit they filed against Lolit after she issued an apology and retraction for the "malicious" column she had written against them.


In the glitzy, highly competitive world of show business, antagonism and rivalry are commonplace. Tabloids, showbiz talk shows and cyberspace forums thrive on conflicts that spice up the running rumor mill. But as fast as quarrels develop so do reconciliations. The entertainment industry is such a small world that celebrities don't stay enemies for long. After all, bumping into the other during an event or having to work together in a project is always highly probable.

As year 2009 begins, PEP (Philippine Entertainment Portal) lists down, in no particular order, some of the notable reconciliations last year.

LOLIT SOLIS-SAM MILBY-PIOLO PASCUAL. In late 2007, tabloid columnist Lolit Solis was sued for P12 million in a libel suit filed by actors Piolo Pascual and Sam Milby. She had written what the two heartthrobs deemed a "malicious" write-up insinuating they were gay lovers.

Sam and Piolo sought her apology and retraction for them to drop the case. Lolit refused and the case dragged on. Possible jail time for the ageing talent manager loomed.

Lolit finally relented and issued an apology in May 2008. "There is no factual basis for my article, which came out on October 15, 2007. I am extremely sorry for dragging the names of Sam and Piolo," stated Lolit in a retraction letter submitted to Manila Regional Trial Court Judge Jose Mendoza.

WILLIE REVILLAME & JOEY DE LEON. As the faces of their respective popular noontime shows, Willie Revillame of Wowowee and Joey de Leon of Eat Bulaga! exchanged barbs in front of nationwide audiences. For almost two years, viewers had to put up with these personal tirades during lunchtime. These variety shows were supposed to be entertaining.

On October 17, 2008, Willie and Joey came face-to-face at the 1st Supreme to the Extreme Awards of the Philippine Star at the Embassy Super Club.

When Willie bagged the Televisionary Award, he acknowledged his rival by saying, "I would like to share this award to a supreme talent, supreme icon, my idol Mr. Joey de Leon. I share this award with you."

Joey, who clinched the Supremo Award, gamely accepted Willie's gesture by joining the Wowowee host on stage. Whether the reconciliation between the two hosts is final remains to be seen. But, for now, it appears that both parties are sincere in keeping the peace.

LANI MERCADO-GRETCHEN BARRETTO-RUFA MAE QUINTO. Ramon "Bong" Revilla's 42nd birthday on September 24, 2008 at the C3 Events Place in Greenhills, San Juan turned out to be extra-special. After rendering a song number, his colleague and good friend Jinggoy Estrada called on the women who were once linked to the action superstar turned senator: Gretchen Barretto and Rufa Mae Quinto. In yet another surprising gesture, Bong's wife Lani Mercado gamely joined Gretchen and Rufa Mae while the birthday celebrator tensely watched.

"To Lani and Bong, I hope that you'll be happy forever!" said Gretchen when asked to give a message. Rufa Mae quipped, "Heypi-heypi birthday, have many more birthdays to come and it's good to see you together."

Flashback: March 2, 2008. Ruffa Gutierrez narrated on The Buzz that she felt slighted after being ignored by Lani Mercado at the birthday party of GMA-7's SVP for Entertainment TV, Wilma Galvante.

Ruffa lamented: "She left my poor perfect pouty lips in the air na like that. Siyempre, napahiya naman ako, di ba? My God, in-ignore ako! Ano kaya ang ginawa ko? And then, ‘pag ganun [paghalik] ko, she just turned around, tinalikuran and then she left. Sabi ko, ‘Donita [Rose], nakita mo ‘yon? What did I do? Bakit niya ako tinalikuran?'"


ALFIE LORENZO & JUDY ANN SANTOS. Alfie Lorenzo's relationship with his superstar ward, Judy Ann Santos, has always been volatile. As a manager, Alfie is typically protective of his talent but his bluntness oftentimes leads to certain issues concerning Juday.

In 2008, Juday found herself without a contract from longtime home network, ABS-CBN. When one finally arrived, Juday reportedly opted first to consult a lawyer to review the content of the contract. Alfie was said to be slighted with the move and assumed that perhaps Juday had her own set of "sulsoltants." Juday-still hounded by the tax evasion charges filed against her by the Bureau of Internal Revenue-explained that she was just being cautious before signing.

The misunderstanding was finally ironed out when Juday personally visited Alfie at his home to discuss the matter.


ANNABELLE RAMA & WILMA GALVANTE. Annabelle Rama ended 2008 on a positive note after she reconciled with GMA-7 SVP for Entertainment TV Wilma Galvante during a chance encounter in Los Angeles, California on December 3, 2008.

The two had a falling out after Annabelle accused the network executive of deliberately pitting the birthday concert of GMA-7's bet Dingdong Dantes and Marian Rivera against the first-day showing of her son Richard Gutierrez's movie with KC Concepcion, For The First Time.

Wilma opted not to hit back so as to avoid a verbal war. At the time of the reconciliation, Annabelle just came from an operation.

In an article written by entertainment columnist and PEP (Philippine Entertainment Portal) blogger, Jojo Gabinete in Abante, he narrated how the two buried the hatchet.


THE ERASERHEADS. Speculations on the breakup of the phenomenal local ‘90s band Eraserheads continued to grow since their bitter fallout in 2002. But on August 30, 2008, the band composed of Ely Buendia, Marcus Adoro, Buddy Zabala and Raimund Marasigan finally gave in to public clamor and reunited for a single night in a massive concert held at the Fort in Taguig City.

Ely's poor physical and emotional health unfortunately got in the way and the concert ended abruptly after the set of 15 songs. Nevertheless, the events leading to the musical, and afterwards, helped repair the former Eraserheads' strained relationship. As further proof of their renewed friendship, frontman Ely Buendia and drummer Raimund Marasigan agreed to appear together in a photo shoot organized by eventologist Tim Yap.

As of press time, part two of the Eraserheads reunion concert is reportedly in the works and is slated this coming March.

She was referring to her rift with fellow young star, Michelle Madrigal. The two had a misunderstanding after Michelle reportedly accused Pauleen of incessantly calling her then boyfriend JC de Vera over the phone during their Boracay holiday a few years back.

A couple of weeks after the interview, Pauleen was singing a different tune.

At a press conference (November 11) tendered by GMA-7 to launch its new fantaserye, Luna Mystika, Pauleen happily announced that all's well between her and Michelle. "Yong usapan namin, sa amin na lang. But it was a good talk and okay na."

Both are in the cast of Luna Mystika and many surmised that the reconciliation was triggered by the project.

"No, it's not because of the project," Pauleen quickly clarified to PEP. "Ayaw mo naman ng meron kang kaaway and, as we always say, sana ‘wag kaming pilitin because eventually it will happen and, you know, tamang timing dahil meron kaming project."

Michelle seconded Pauleen's statement, claiming that the reconciliation was just waiting to happen.