Blockbuster films of 2008, according to SM Cinemas and Robinsons Movieworld 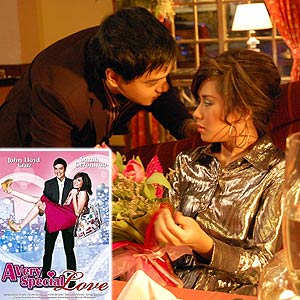 
A bubbly editorial assistant working for a grumpy magazine editor seemed an unlikely pair but their chemistry worked onscreen. It worked so well that Laida and Migs, played by Sarah Geronimo and John Lloyd Cruz in A Very Special Love, proved to be the supreme love team in 2008. Directed by Cathy Garcia-Molina, this Star Cinema film premiered in Philippine cinema houses starting July 30, 2008.

The movietopped the list of blockbuster films culled by PEP (Philippine Entertainment Portal) from SM Cinema and Robinsons Movieworld, two malls that have branches located all over the Philippines.

Films from Star Cinema dominated the lists given by SM and Robinsons. In fact, four out of the top five films of 2008 were produced by the film production arm of ABS-CBN. These are: A Very Special Love, For the First Time, Caregiver, and Ang Tanging Ina N'yong Lahat.

The Valentine offering of GMA Films and Regal Entertainment, My Bestfriend's Girlfriend, starring Richard Gutierrez and Marian Rivera, landed in the 4th spot of the SM list.

PEP noticed that the Top Ten Pinoy films of both shopping-mall theaters were almost the same. However, Robinsons Movieworld included Desperadas 2 as one of the top films last year but this Regal Entertainment movie was not in the Top Ten of SM Cinema.

The movie based on characters of the popular ‘80s sitcom, Iskul Bukol: 20 Years Later, topped ticket sales in SM but not in Robinsons.

It is also interesting to note that moviegoers prefer to watch comedies (particularly romantic comedies) more than other genres. The romantic comedies, A Very Special Love and My Bestfriend's Girlfriend, entered the magic five; the sequel of Ang Tanging Ina was a comedy that could be enjoyed by the whole family. For the First Time, the KC Concepcion-Richard Gutierrez movie shot in Greece, had its share of comedy and drama.


Sharon Cuneta's Caregiver was heavy drama but it landed on the third spot of the SM list. It was also shot abroad, specifically in London.


SM CINEMA. With 32 branches nationwide, translating to 198 screens (including IMAX), SM is undoubtedly the largest cinema exhibitor in the country today. According to Gerry Ocampo, the booking manager of SM Cinema, the data he presented is based on ticket sales from all SM cinemas nationwide. However, these include ticket sales only up to December 31, 2008.


In an email that he sent to PEP, he stated, "Ang Tanging Ina N'yong Lahat generated more sales from January 1 up to the present, which means it can overtake some movies on the top spot after its entire run."


Here is the list of the most watched Pinoy films for 2008 (in random order) according to SM Cinema:

For the First Time


A well-placed source from SM ranked the top five films according to their box-office sales:

2. For the First Time

ROBINSONS MOVIEWORLD. Melissa de Guzman, Marketing Manager of Robinsons Movieworld, revealed that they have 83 screens distributed among their 13 branches nationwide.

2. For the First Time