The Cool Couples of Showbiz 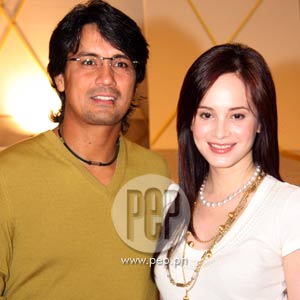 The PEPsters decided on who in PEP's short-list of real-life couples they deem "cool."

Presenting the celebrity couples who made it to this week's Top List of PEP (Philippine Entertainment Portal)—the "Coolest" of them all!

We started a poll in the PEP forums and asked the PEPsters: Out of the several choices that we offered, who among the celebrity couples did they deem cool?

By "cool," we meant how they represent themselves publicly as a couple in terms of their relationship and their showbiz careers. Moreover, according to Merriam-Webster, "cool" in its slang usage means "very good," "fashionable" and "hip."

In the world of showbiz, "cool" can be used to describe celebrities who have a good sense of social conduct and who enjoy approval in the public eye.

With Valentine's Day just around the corner, we decided to round up our short-list of 15 cool real-life couples and see who among them the PEPsters would vote the "coolest". We gave the forum members time to vote (January 27-29) and, if willing, to give their reasons. Some PEPsters voted and others gave their feedback. After three days, 40 different people voted and the results are as follows:

Majority of the 40 people who voted in PEP's poll chose Richard Gomez and Lucy-Torres Gomez as their coolest couple. Why? Read on and find out!

Today, even if Goma and Lucy hold separate TV shows in different networks, they maintain a healthy relationship on both personal and professional levels.

Ariel Rivera and Gelli de Belen. The fact that this couple had never been involved in any controversy whatsoever makes them cool. Their "boyfriend-girlfriend" approach to their relationship keeps the love between them as fresh as ever.

Aga's recent commercial also impressed some PEPsters. How cool it is for a guy to perfectly describe (and in great detail too!) some of his "when I met you" memories about his wife.

Aside from our PEPsters' observations, the other cool thing about Zoren and Carmina is their attitude towards controversy. For example, Rustom Padilla's comeback as Bebe Gandanghari definitely created buzz in showbiz and the public wanted to hear Zoren's reaction. People were surprised when the couple expressed support for Bebe. Thus, the issue died a natural death.

Juday and Ryan's closeness had been known to the public for a long time yet some people thought that it was all for show. Controversies may break other couples but Juday and Ryan are even getting closer to the wedding aisle.

Francis Magalona and Pia Arroyo. The Master Rapper and his wife Pia have wowed their fans in the past years with their harmonious relationship both oncam and off.

In spite of his health issue, Francis M. has continued to make beautiful music and entertain his fans with his rhymes and beats. Pia supports her husband all the way, including strengthening their whole family. "Cool under pressure" best describes this couple.

The acclaimed composer-singer and Asia's Songbird look cool together mainly because of their musical harmony and the fact that they have stood firm in their love in the face of controversies that hounded their relationship.

Although it has been more than two decades since their wedding, Tirso Cruz III and Lynn Ynchausti remain as sweet as ever. PEPster Phantom noted that "they were acting like boyfriend-girlfriend, nagkukulitan sila."

Early marriage doesn't necessarily mean a short one. A PEPster said that Yayo and William have been together for so long that they represent young couples who marry at a young age yet stay together for years. For non_biz_gurl, that's cool.

PEPster non_biz_gurl was particulary proud of Yayo because she stood by William when their relationship as a couple faced hard times due to showbiz controversies and personal issues like financial troubles.

Although no longer active on the tube, this couple was voted as one of the coolest due to their sporty lifestyle together and the story of how they met.

Paolo and Suzi first met on the defunct sports-oriented show Game Plan, which they both hosted. Their love and enjoyment for nearly every sport imaginable developed alongside their interest in one another. So, on May 6, 2001, they made a new game plan by tying the knot.

Eddie Gutierrez and Annabelle Rama. Eddie and Annabelle's personalities greatly differ, and that may be the one thing that has kept them together.

The PEPsters believe that this couple is cool because they give color to the showbiz world—Eddie with his enduring pretty-boy looks and positive outlook on life, and Annabelle with her over- protectiveness for loved ones and her brutal honesty on and off-cam.

The age and personality gap between the two seemed to be a non- issue for them. Vic Sotto's wit and laughter mixed with Pia's seriousness made them the perfect couple.

Their bond, like other celebrity relationships, was hounded by controversy and some have even doubted they would last long. But, as we can all see, Vic and Pia's light approach to such negativity glued them more closely than ever before.

And that makes them cool.