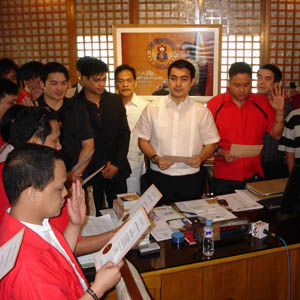 The Board of Directors are: Fernan De Guzman, Rommel Galapon, John Fontanilla, Sandy Es Mariano, Rodel Fernando. Among the seven-man board, all except two, Joe Barrameda and Robert Pangis, made it to the Induction and Oath Taking ceremonies. Proxies were members Wally Peralta and Beth Gelena, respectively.

As the newly-elected PMPC prexy, Roldan Castro expressed optimism on the Club's fresh start. He was filled with enthusiasm as he revealed some plans on the PMPC agenda, including several benefit shows/concerts in March, to be followed by the grand Silver (25th) Anniversary of the Star Awards for Movies in mid-2009.