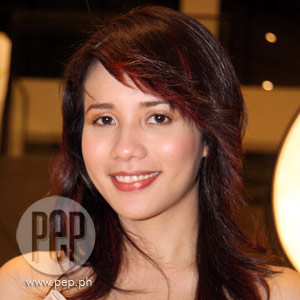 Karylle relates how spiritual counseling helped speed up her healing process. "With all the blessings nga that come your way, why will you look at what you don't have? Siyempre, you focus on the good things that you have because 'yon ang dadami," says Karylle about her motivation to quickly recover from breakup with boyfriend of three years Dingdong Dantes.

At first, it was difficult.

Karylle admitted this in one of her previous interviews. Letting go of a three-year relationship was not that easy, so she initially kept mum about the details.

The only time she became more open about how she felt was when columnist Ricky Lo interviewed her. She declared then: "I won't say, ‘Moving on,' I'd rather say, ‘Moving forward' para mas mabilis." (Click here to read related article)

A month after the breakup was officially announced, a new Karylle became more upfront with the press. She had a new look. She signed a deal with her new home, ABS-CBN. She was launched as the endorser of a new campaign by Bench Body called "Single is sexy." (Click here to read related article )

The fast-rising star of Kapamilya network was generous in sharing her "moving-forward" top list for those who will celebrate Valentine's Day alone. Here's what PEP (Philippine Entertainment Portal) found out from Karylle.

TURN YOUR MUSIC PLAYER ON. Karylle said that instead of dwelling on the sad thoughts, she just turned to one thing she loves: music.

LISTEN TO AUDIOBOOKS. The breakup also introduced to her the to several self-help books. These books somehow helped her in reflecting on her life. However, instead of reading the book inside her room, Karylle listened to audio books while having her regular jog.

She continued, "Kasi, what's happening before, siyempre, when you're going through something, you have a lot of negative thoughts. And instead na mag-drown ka pa in self-pity or something, saksak mo lang 'yong iPod and makinig ka. It really helps naman."

ENGAGE IN PHYSICAL ACTIVITY. To keep her from thinking too much, Karylle also said that she tried to go out. However, this was not the usual gimik with her girl friends, but it's something that can make her look fit. After all, she now endorses Bench's lingerie.

Karylle started by going to the gym regularly and by joining UNICEF's Walk on the Child's Side marathon.

WATCH MOVIES. Watching a movie also helped her realize what she already has. During the lowest time of her life last year, Karylle said that she really enjoyed the movie Sisterhood of the Travelling Pants 2 .

When asked about the movies she watched, she excitedly narrated, "I saw this movie nga sa plane, Sisterhood of the Travelling Pants 2. E, kasi di ba, kapag ganito, your girlfriends, you hold on to them talaga. 'Yon nga, everyday ko silang nakakausap. Until they know you're okay, kahit anong oras, di ba?

"When I saw that on the plane, parang nakita ko how lucky I am to have friends. Kasi, friends ko na sila noong high school pa lang and they're very, very close to me. Alam mo 'yon, mahirap kasi when you go through something, 'tapos wala kang very good support group. So, I'm just very blessed."

CALL A FRIEND. Having mentioned the value of friendship, the Kapamilya singer went on by relating about her friend who flew in from the States and comforted her during her saddest days in 2008.

"The good thing was I always have friends around. I have a very, you know, great set of friends and one even flew in from the States to be here with me. Maganda na rin siguro having a friend abroad kasi I would chat with her everyday," said Karylle.

She continued, "'Yong best friend ko is the one who's abroad. Actually, two of them-one is in Australia and one is in the States. So, the one in the States, she went home to watch the last show of West Side Story. She surprised me, as in noong nakita ko siya, sumigaw talaga ako ng pagkalakas-lakas. E, after the play, ang taas na ng boses mo, akala yata ng mga tao may nangyaring masama.

SEEK SPIRITUAL COUNSELLING. If there's one way of "moving forward" that Karylle has been very vocal about, this was her decision to seek professional help from a spiritual counselor at the Center for Family Ministries (CEFAM)

"So, naging open ako sa help na medyo mas professional, I even went to see a counselor priest, mga things like that. I guess, just conversing with them, nakikita ko 'yong wisdom nila."

Karylle also realized that being open to this counseling she had gone through not only helped her personally, but she also inspired other depressed people to seek professional help. "Parang I really never wanted to share anything, pero when I had my first interview with Tito Ricky [Lo, Philippine Star], ang dami kong nakuhang e-mail even from friends. Nagulat ako because they wanted to go on retreat, they were asking, ‘How do you do it? Where did you go? I wanna try it out.'

And the best change that happened to Karylle after the counseling and the retreat she had in Assumption Retreat House in Baguio was that she has become more expressive about her thoughts.

She said, "I'm comfortable expressing my self. In the retreats that I've done, we do a lot of sharing-sharing. So, the more you hear your thoughts out loud... Kasi, minsan they let you hear your answer, parang niri-ring yata ang term. Parang, ‘I'm gonna tell you my answer," then sasabihin nila back to me, parang it makes enough sense to share."

In spite of all these things she did, Karylle was honest in saying that she has not moved on 100 percent yet. But she was positive in saying, "You know, it's very, very close. [I have] new home [network], new recording contract, a lot of things going on and I'm very happy about it. And with all the blessings nga that come your way, why will you look at what you don't have? Siyempre, you focus on the good things that you have because 'yon ang dadami."