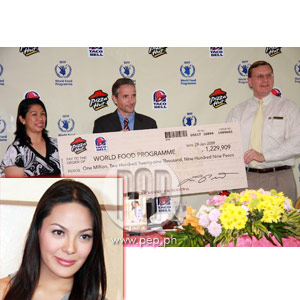 Despite the absence of National Ambassador against Hunger KC Concepcion, Philippine Pizza, Inc. successfully turned over the amount of P1, 299,909 to the United Nations World Food Programme last January 29 at the Mandarin Suites in Gateway Mall, Araneta Center.

The amount was raised through donations made by Pizza Hut and Taco Bell customers around the country.

Here in the Philippines, the UN's World Food Programme focuses its anti-hunger campaign in Mindanao. During the turnover rites, the WFP announced that the donation money accumulated will be used to carry out regular school-feeding activities, which would cover the allocation of hot meals and take-home family ration distributed to 71,000 pupils in 427 schools covering the areas of Sultan Kudarat and North Cotabato in Mindanao.

KC'S STATEMENT. Actress-model KC Concepcion, who is currently the appointed flag bearer of the campaign against hunger in the country, was not able to grace the special affair due to illness.

In a statement sent by KC to the reporters who were present during the event, she expressed deep regret for her non-appearance.

"It is with regret that I am unable to help represent the World Food Programme in this momentous occasion. I am not well enough to be personally present today due to my very tight work schedule for my forthcoming movie [When I Met U].

"I am very sorry for not being there today to express my sincerest appreciation on behalf of the children's families supported by WFP's Food for Education activities that provide nutritious support during these challenging times of conflict in Mindanao.

"Thank you very much to our donors, their partners and customers that have provided much needed support to bring food to children and help them have a fresh start."

KC was named as National Ambassador for the United Nations World Food Programme early last year following approval by three screening offices in Thailand, Vatican and Rome. Her absence at last week's turnover was only one the few times KC wasn't able to personally attend activities organized by the UN World Food Programme.