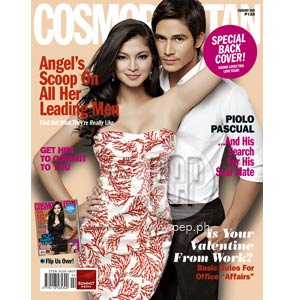 This February, Cosmopolitan magazine spices things up with a special back-to-back cover: Angel Locsin does a classic Cosmo pose on the front cover, and on the special back cover, she is joined by love-team partner Piolo Pascual. This marks the first time Cosmo has ever featured a love team together on one cover.

The Angel Locsin-Piolo Pascual loveteam is one of the hottest team-ups in the country today, sharing an undeniable chemistry in the teleserye Lobo, their numerous endorsements, and their big-screen debut, Love Me Again (Land Down Under). Angel only has nice things to say about her onscreen partner.

Everyone knows, of course, that someone else is giving Angel all the inspiration she needs off-camera. Luis Manzano has been rumored to be her boyfriend for over a year now, yet they refuse to put any label on their blooming relationship.

To those pressuring her and Luis to give an answer –to the point of speculating that they may end up together in the end—she has only this to say. “Bata pa kami. Ang dami pang puwedeng mangyari. Ayokong ma-hinder namin yung growth ng isa’t isa. Sa sobrang pagka-sacred [ng marriage], huwag natin madaliin.”

It is a sentiment that Piolo echoes, especially since he became a Christian six years ago. “I’m praying about [finding a woman] because I want to be right,” he shares, “Hindi biro yun, e, it’s a life-long commitment. You can’t be wrong because once you make that decision, once you commit yourself, you’re bound to that person forever.”

He is dead-set on giving his kids a complete family, and refuses to rush into anything. Piolo does let slip that he has been eyeing
someone, but is taking things very, very slowly.

“Nakakatakot because [having] time ang kalaban,” he reveals, adding that his idea of a relationship is having two parties that complement and inspire each other. “What if we’re not able to do that? [But] she knows my fears, she knows what I’m feeling.”

Read more about Piolo’s mystery girl and Angel’s thoughts on her past onscreen partners in the February issue of Cosmopolitan, now available in newsstands, bookstores, and supermarkets nationwide. For more of Cosmo online, log on to www.cosmomagazine.com.ph.