Iya Villania and Drew Arellano not yet thinking of wedding bells 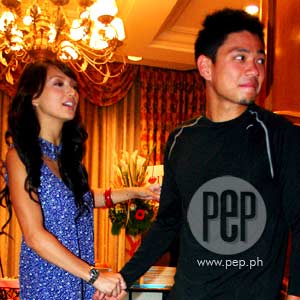 "Basta, I know for myself. And even for him, he knows. Although we're working on getting there, we're not there yet," Iya Villania said about taking her relationship with Drew Arellano to a higher level.

"A lot of people don't know, pero probably some know already, she's been juggling school and work. She's just pulling it not just satisfactorily but she's been doing it extraordinarily. That's why I call her a freak. She's crazy," sabi ni Drew.

"In fact, sobrang hanga siya sa akin kasi I was able to work and do school at the same time. He's been so understanding. In fact during the times na may free time ako pero I had to give it sa pag-aaral ko like work on a paper or study, he understands."

"It's not about me graduating and being allowed to get married. Before you get into marriage, you have to see the state of your relationship first. And we're not there," natatawang sabi ni Iya.