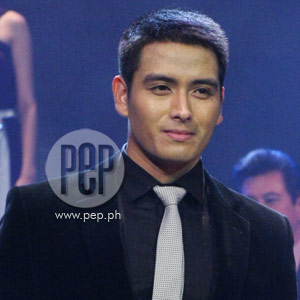 "I'm proud of the roles I did. Sa Bridal Shower, e, pinag-aralan ko yung role ko doon. I won an award for that role. I'm proud and will always be proud. It was an artistic decision," says Alfred Vargas on playing sexy roles.

Alfred Vargas dealt with many issues ranging from showbiz to politics yesterday, February 8, when he guested live on Showbiz Central to answer questions posed by the five hosts.

Raymond Gutierrez's question came next: "May mga nasusulat na you have plans on quitting showbiz to join politics. Is there any truth to that?"

"I have no plans on quitting showbiz, but I'm thinking about politics," Alfred answered. As early as now, I'm trying to get to know the field and it takes a lot of preparation. It's a decision na hindi lang overnight. So, mag-uumpisa 'yon kung ready ako, tapos if the people around me are ready to support me. So far, okay naman lahat and we're seeing good signs. 2010 pa naman 'yon and the important thing is that I'm willing to serve."

Raymond followed up his question with another, still politics. Has Alfred made up his mind on joining politics and by what percentage? Alfred simply stated that he really just wants to help a lot of people.

Next, Mo Twister asked, "Can you say that you were so desperate to join the industry that nagpa-sexy ka sa umpisa? Why did you do sexy roles just to join showbiz?"

"I'm proud of the roles I did," said Alfred. "Sa Bridal Shower, e, pinag-aralan ko yung role ko doon. I won an award for that role. I'm proud and will always be proud. It was an artistic decision."

Pia Guanio raised what supposedly was the final question: "Your first onscreen kiss was from Rustom Padilla. Now that she's BB Gandanghari, are you willing to do another kissing scene with him?"

"We just ceased to be happy," admitted Alfred.

When asked on who broke with who first, he said, "It was more on her."