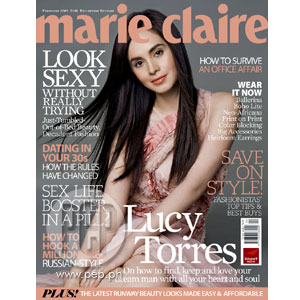 “I’m used to all these guys treating me like a princess,” says Lucy Torres-Gomez. “[And here comes Richard who] could easily find another girl to go out with him [if I said no]. My guard was up.”

It had all the makings of a fairy-tale romance. Matinee idol Richard Gomez swept leading lady Lucy Torres off her feet and married her after a whirlwind romance of seven months. Eleven years later, they still live happily ever after.

What people don’t know is that Lucy almost never had the chance to even meet Richard. “My dad was very ambivalent about my accepting the Lux ad,” Lucy tells marie claire magazine as she graces the cover of its February 2009 issue. A series of back-and-forths ensued before she could star in the Lux ad that would change her life.

The Lux ad back in 1993 was her chance not only to meet her ultimate crush in the flesh, but also to work closely with him.

“We did eight ads over the course of five years,” Lucy shares. “We’d see each other, then he’d call me every day for two weeks when I’d go back to Ormoc…then he’d disappear. I would never hear from him again or see him.”

Richard would pop in and out of her life, which was a departure from the men Lucy was used to.

“I’m used to all these guys treating me like a princess,” she says. “[And here comes Richard who] could easily find another girl to go out with him [if I said no]. My guard was up.”

It was only in May 1997 that Richard really pursued her seriously, calling her everyday and even flying to Ormoc for a surprise visit. After that Ormoc visit, the rest was history.

Saying “yes” to marriage so soon was very uncharacteristic of Lucy, but she says, “It never felt forced. It felt so right. Of course, I was scared. I prayed to God, ‘If he’s no good, if he’s not for me, please take him out of my life.’ But he never disappeared, the love just kept on growing.”

Lucy talks candidly about her marriage with Richard, and shares her thoughts on love in the February issue of marie claire, available in newsstands, bookstores, and supermarkets nationwide.