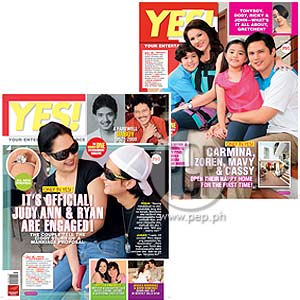 The results are in! Readers voted Carmina Villarroel and Zoren Legaspi's house the Celebrity Home of the Year, while the engagement announcement of Judy Ann Santos and Ryan Agoncillo was considered as the Most Riveting Story for 2008 in YES! magazine's Reader's Choice Award 2008.

Readers' Choice Awards 2008, the annual three-month poll of YES! magazine which ran from September to December 2008, now has it official list of winners.

Pinoy showbiz fans from around the world had given their verdict, and the biggest winners are Judy Ann Santos and Ryan Agoncillo, who landed the top spot in two categories.

Despite the intrigues and controversies which surrounded the tandem of Dingdong Dantes and Marian Rivera during the last quarter of 2008, the votes they generated proved that they still have the loyalty of the DongYan supporters.

Last Thursday, February 5, YES! voters gave the Celebrity Home of the Year award to actress-TV host Carmina Villarroel, whose house was featured in YES! magazine last May 2008. This celebrity home feature, which also had Carmina's husband Zoren Legaspi and their twins Cassandra and Maverick on the cover, got a total of 4,154 votes from SMS (short message service) and online voting via the magazine's online affiliate, PEP (Philippine Entertainment Portal).

Following the spot of Carmina's home was her SiS co-host and friend Gelli de Belen and Ariel Rivera's house, featured in the August 2008 issue, which generated a total of 3,961 votes. The readers also liked the condo unit of ABS-CBN news reporter Karen Davila, which appeared in October 2007 and had 3,006 combined votes from SMS and on-line voters.

Meanwhile, Kapamilya star Claudine Barretto received the Young Female Superstar award yesterday, February 8, at the Sunday variety show ASAP '09. She got a total number of 71,093 votes from her fans who voted online and via SMS.

Meanwhile, Ang Babaeng Hinugot sa Aking Tadyang stars Dingdong Dantes and Marian were dubbed the Most Popular Love Team. Their avid followers put in a total of 43,321 votes by sending text messages and by logging on to www.pep.ph.

The showbiz team-up and currently the leads of comedy soap I Love Betty La Fea, John Lloyd Cruz and Bea Alonzo, placed second with a total of 21, 405 combined votes. The third spot went to the actors of the most recent Star Cinema movie titled Love Me Again (Land Down Under), Piolo Pascual and Angel Locsin.

Other showbiz love teams that were included were Tayong Dalawa main actors Gerald Anderson and Kim Chiu, When I Met You lead actors Richard Gutierrez and KC Concepcion, Dyosa stars Anne Curtis and Sam Milby, and the team-up of Maja Salvador and Geoff Eigenmann, who will reportedly work together in the upcoming soap of ABS-CBN called Moon River.

Meanwhile, here are the results of the other categories of YES! magazine's Reader's Choice Awards 2008:

Wedding of the Year

Scene Stealer of the Year

Cover of the Year

Buy the upcoming March issue of the number one entertainment magazine, YES!, for more details about the YES! Readers' Choice Awards.