Ruffa Gutierrez prefers to spend Valentine's Day with her daughters 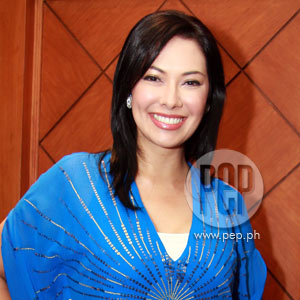 Superbusy TV host-actress Ruffa Gutierrez was not able to watch the premiere of her brother Richard Gutierez's movie When I Met U. So, when asked what she will do on February 14, she replied, "Hay naku, baka manood ako ng When I Met U."

What if someone asks her for a date?

"Well, I'm free," Ruffa smiled. But she qualified, "Tingnan natin kung worth my time ba yun 'no? Di ba, sa sobrang busy, you have to choose naman the people you go out with."

Ruffa said she'd rather spend time with her lovely daughters, Lorin and Venice; and with her friends or by herself, rather than go out with people she doesn't personally know.

ON HER PLANNED BOOK. During the interview with Ruffa yesterday, February 12, PEP (Philippine Entertainment Portal) found out that she was postponing her plan to write her book. (Click here to read related article)

Apparently, her former husband Yilmaz Bektas changed his mind and warned Ruffa not to continue her plans.

How did he find out that she was planning to write her book?

As in her previous statements, Ruffa maintained that she would not divulge anything shocking about her life in the book. "It's gonna be a fun book!" she had promised. (Click here to read related article) And so, she was puzzled over Yilmaz's change of mind.

Although disappointed about having to shelve her book, Ruffa remains positive now that she has a new project, the morning show Ruffa and Ai.

Would she still write the book in the future?