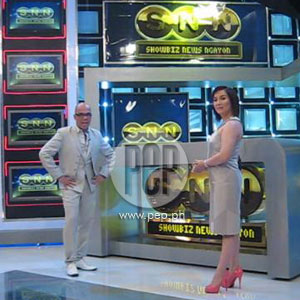 Kris Aquino (right) pointed out that it has been three years since she launched Deal or No Deal with a totally different format. This time, she hosts a new showbiz-lifestyle show titled Showbiz News Ngayon (SNN) along with co-host Boy Abunda (left).

Even though Kris Aquino has been hosting the morning show Boy and Kris everyday on ABS-CBN, she admitted to the press that she still felt nervous about doing a primetime show with Boy Abunda. Titled Showbiz News Ngayon (SNN), the pilot episode of the 30-minute talk show was aired last night, February 16. PEP (Philippine Entertainment Portal) was invited to watch the pilot episode of the show that was aired live from Studio 8 of ABS-CBN.

The TV host revealed that she went to different churches in Bohol and Manila to pray fervently for her new show to do well in the ratings game.

In a previous interview, Kris mentioned that she wants to spend more time with her family, so she decided to lessen her workload. But given that SNN is a daily primetime show, what urged her accept the position as co-host?

"Dahil walang taping!" says Kris excitedly. "Except for once a week when there's a major story so it gives me more time talaga. It allows me to have breakfast with James [Yap, her husband], nag-yoga ako, since walang school si Josh [eldest son] hinatid niya ako, nakipag-merienda ako with Baby James. I should have had dinner with them but gusto kong magsimba so I left at 5:30 pm. Pero it gives me the opportunity na Monday, Thursday and Friday, I can have breakfast with my family and dinner with my family and it gives me the chance to have yoga every day."

She adds: "May once a week na major story that Boy and I have to do, like yung kay Willie [Revillame], ako yun. Ang saya coz you're done...you're live!"

During the pilot telecast of SNN, a video of Kris was shown as she was toured by the Wowowee host onboard his yacht. Kris explained how she got the idea to feature Willie's yacht on their show. "Dahil sa YES! yun lang ang hindi pa napakita, so yun ang aabangan ng tao coz that's one thing that they haven't seen."

How will Showbiz News Ngayon be different from the Sunday showbiz talk show The Buzz? Kris paused before answering, "Don't you feel it already? You're not going to tour people around homes on The Buzz. Parang ang feeling ko, parang it's Star Studio plus YES! plus Us Weekly plus People and lifestyle magazines come to life. Kasi ang The Buzz is strictly interview-based and intriga-based pero ito may lifestyle, may intriga, kumpletong-kumpleto."

It will be recalled that at the height of the James Yap-Hope Centeno controversy, Ai-Ai jokingly told her friend Kris, "Isauli mo muna si James sa nanay niya." The basketball player was offended by the comedienne's joke and since then, the two have not yet patched things up even though Ai-Ai has apologized publicly to the cager.

After talking with Kris, PEP took this opportunity to ask SNN co-host Boy Abunda regarding Ai-Ai's statement that she will not attend the Ruffa and Ai episode when Kris becomes a guest on her morning show.

"When Ai guests on The Buzz, Kris stays in the dressing room...they give each other space," reveals Boy. "Here are two ladies na hindi nagpa-plastikan, pero parati kong sinasabi there has never been a problem between Kris and Ai, so I don't want to talk about it. The problem had something to do with their friendship...walang pinag-awayan sina Kris and Ai. Even at this moment, I hope sana maayos. In our last episode of Boy and Kris, Kris even said, 'Good luck, Ruffa and Ai!"

It should be remembered that Boy handles the careers of both Kris and Ai-Ai. Does he have plans to intervene in this ongoing gap?

"I know both of them and hindi mo mapipilit yun. But I also know that one day, it's gonna happen. Magkakasalubong din 'yan but both respect each other.

"At sanay ako sa ganyang eksena," says the TV host-talent manager. "I managed Dawn Zulueta and Gretchen Barretto at the height of their trouble. The trick in being a situation like that is makinig ka lang. Do not be judgmental. Gagawa at gagawa ang Diyos at ang pagkakataon na magkaayos tayong lahat."