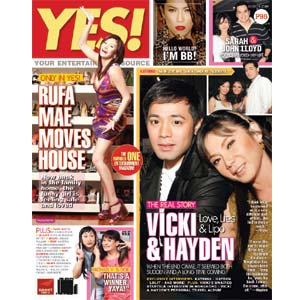 YES! magazine's March 2009 issue tells the real story behind the much talked about breakup of the famous celebrity doctor Vicki Belo and her boyfriend of three-years, Hayden Kho.

Hayden further explains his side of the story in the YES! exclusive interview: how his relationship with Vicki worked despite the age difference, his feelings about being thrown into the frenzied world of show business, his attempted suicide, his infidelities, and his alleged sex videos.

"I'm not the one to begin flirtations... to begin the dance," he reveals. "Temptation has always been there. 'Yong iba nalalabanan ko, 'yong iba hindi. I'm a man after all."

One of the "temptations" that he wasn't able to fight was the young sexy actress, Katrina Halili. Although he says there have been other girls during the time he was committed to Vicki, it is only Katrina that he names.

Katrina, also in an exclusive interview, tells YES! about how she met Hayden, how their relationship worked, why they broke off, and how she tried to make amends with the Doktora.

In the midst of harsh speculations—even Hayden himself has said that their relationship was just "for fun"—Katrina stands by her word: "Na-in-love ako. Tanga-tanga ko. Pasensiya."

As Lolit sees it, Hayden's infidelities and alleged sex videos can be attributed to Hayden's personal bout with the age issue between him and Vicki.

At press time, Vicki has remained tight-lipped about the details of their breakup in all her interviews on TV, print, and entertainment magazines.

In an un-aired interview with Startalk, Vicki surmises that the man she has loved for three years may be made of other stuff: "I think what he showed us is a very different part of him... He lied to me so much."

Get the most comprehensive article to date about the dramatic breakup of Vicki and Hayden in YES! magazine's March 2009 issue.