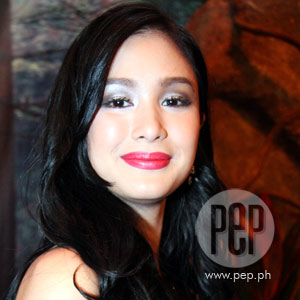 The issue about Heart Evangelista's refusal to appear on the afternoon soap Muling Buksan ang Puso has now become a legal matter. GMA-7 sent a reminder letter to Heart but her manager, Annabelle Rama, claims it was the Kapuso network that violated the contract.

"This pertains to the agreement for talent services between you and GMA Network. We were informed that your managers are turning down a program assigned by GMA to you owing to some alleged restrictions contained in your endorsement contract with Centrum.

"May we remind you of relevant provisions of the Agreement, as follows:

"1. Talent hereby warrants and represents that: (a) she has full power and authority to enter into and perform this agreement; and ( b) she has no other contract with any other person, firm, corporation or other entity which will or might interfere with the execution or performance of this agreement (Emphasis: ours).

4.2. In case of breach by TALENT af any provision of this Agreement or of any of Talent's warranties and representations, GMA may in addition to and without prejudice to any other remedy, recover liquidated damages from TALENT in the amount equivalent to TALENT's Minimum Guarantee for the first year (Php15M) of this Agreement.

"We have not been furnished a copy of the Centrum contract. If such restrictions do exist, and if you cannot perform the talent services for the program assigned to you because of such restrictions, you would be in clear breach of your warranty under the Agreement. In that event, we shall proceed to avail of legal remedies in order to protect our interests. We trust you will understand our position on this matter."

"For and behalf of our client, Ms. Annabelle Rama-Gutierrez, we reply to your letter dated 10 February 2009 addressed to Ms. Love Marie Ongapuco a.k.a Heart Evangelista, copy furnished to Ms. Gutierrez as manager of said contract artist.

"Firstly, our client has instructed us to correct the allegation in your letter that Ms. Ongpauco's managers were turning down a program assigned to her by GMA because of restrictions in her endorsement contract with Centrum.

"During the meeting with GMA representatives, Ms. Ongpauco's managers, including our client, did turn down the network's proposal to have Ms. Ongpauco appear in the television series "Muling Buksan Ang Puso", but their refusal was based NOT on any contract restriction imposed by Centrum, but because the role offered would adversely damage and prejudice Ms. Ongpauco's public image and reputation.

"Ms. Ongpauco is only 23 years old, and enjoys a reputation for appearing in wholesome, family-oriented roles and programs. The role offered by GMA could hardly be described as "wholesome." It would include kissing scenes, bed scenes, dialogue and scenes depicting the proposed character as a mature woman competing with another for the affections of a man. In short, the role was perceived by Ms. Ongpauco's managers as being too mature for their artist. If this role was accepted, it would tarnish her image with her fan base, and would ultimately prejudice her highly-successful career.

"Indeed, Ms. Ongpauco's managers were disappointed and upset that GMA was willing to risk their artist's career and reputation on such a controversial role. Ms. Ongpauco is one of the lead artists in "Luna Mystika," a top-rated, primetime and very wholesome television program. GMA should have known, or at the very least should have considered, that having Ms. Ongpauco appear in a role in direct contrast to her current show would not be well received by the viewing public.

"We reiterate and underscore therefore that your representatives clearly misrepresented the deliberations, since the mature nature of the offered role was the principal reason for its rejection.

"Secondly, we have reviewed Ms. Ongpauco's contract with GMA, and take this opportunity to highlight issues in relation to specific contractual terms:

"a. On the obligations of the Talent detailed in Paragraph 2 and its sub-paragraphs: These paragraphs clearly spell out the projects that the Talent would be assigned in the first year, and these were limited to: (I) Lead actress role in "Asero", (II) Lead actress in "Saan Darating Ang Umaga", (III) Lead actress in a Koreanovela, (IV) Host/performer of SOP, and (V), guestings in programs and specials.

"The contract was executed on 30 May 2008, hence the parties are still in the first year of the contract. The role that was offered and refused was not among the projects that the Talent agreed to do in the first year. Further, it is GMA that has not complied with the contractual terms, since Ms. Ongpauco was not the lead actress in "Saan Darating Ang Umaga", nor has she been given the Koreanovela project. It is our client who must now insist that GMA comply with its obligation to have Ms. Ongpauco appear as lead actress in a Koreanovela series.

"b. Taping days and hours: Paragraph 3.6 of the talent contract provides that Ms. Ongpauco's taping day would be only up to 3:00 am per day.

"Records will confirm that this provision was violated on several occassions, with taping days running as late as 8:00 0r 9:00 am, hence an excess of as much as six ( 6 ) hours on taping days. In a letter dated 04 February 2009 addressed to GMA's Ms. Sally de Castro, Ms. Ongpauco's manager Ma. Cecilia Ongpauco called the network's attention to the fact that the Talent was being made to work beyond the 3:00 am deadline with no overtime pay paid, and Ms. Cecilia Ongpauco provided documents evidencing the release of the Talent beyond the contracted deadline on numerous taping days.

"For and or behalf of our client, we reiterate the demand for payment of overtime pay, and further, put the network on notice that paragraph 3.6 of the contract is being continuously violated.

"c. Endorsement agreements - The contract does not bar or restrict the Talent from endorsing products, neither does it require the Talent to furnish GMA with a copy of endorsements agreements. Hence, Ms. Ongpauco has absolutely no legal obligation to furnish the network with a copy of any contract which she may have executed to promote specific products or services.

"We trust that this reply sufficiently addresses the issues and concerns you raised in your letter dated 10 February 2009. Thank you for your attention."