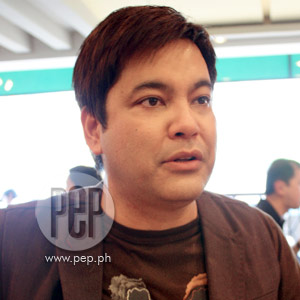 Concert King Martin Nievera confessed being taken aback when he learned that his ex-wife's current boyfriend was the one producing their pre-valentine concert. "Only after I had said yes and only after they got the Araneta did she say to me, 'Okay lang ba kung si Jomari ang producer?' So, what are you gonna say?" shared Martin in a recent interview.

Martin Nievera had no idea at first that Jomari Yllana—current boyfriend of ex-wife Pops Fernandez—was the one producing his pre-Valentine concert with Pops, Missing You, which was staged last February 6 at the Araneta Coliseum in Cubao, Quezon City.

The concert wasn't just an ordinary musical event as it brought together the formidable tandem of Pops and Martin years after their separation as husband and wife, which affected their professional relationship.

During the press conference tendered by PolyEast Records celebrating the release of Martin's new record titled, For Always, he revealed that the information was relayed to him by Pops after venue reservations had been made.

"People are asking, people out of showbiz are going, 'Pare, why would you ever consider doing a show with the boyfriend of your ex-wife?' I told, 'Because that's not how it was presented to me.' When Pops and I talked about this between the two of us, it was a great idea. And right away, she reserved Araneta and all of these, and only after I had said yes and only after they got the Araneta did she say to me, 'Okay lang ba kung si Jomari ang producer?' So, what are you gonna say?"

Martin was cautious not to say it directly, implying instead that he eventually relented because he had already gave his word and it was Pops asking.

"Let's say that we were to rewind it and do it that way, I don't know. I would have to ask first what they produced, you know, I have to know what his track record was. Yun pala, we were the first. So sabi ni Pops, 'Jom wants his first to be us.' It was more of 'Sige na nga, let's do it for Jom,' parang ganun. So on his accolades of hopefully many more productions to come, he can say his first production was Martin and Pops."

RATING JOM. As a neophyte producer, the Concert King described Jomari as someone "who has very expensive idea."

Not that Martin has something against Jom's spendthrift trait as a producer. For a veteran performer who saw it all in terms of production dealings, Jom, for Martin, was a welcome change away from the experienced ones.

Working for Jom's advantage was the fact that he has Pops behind him to give crucial suggestions and pointers.

"It was Pops who would say, 'Ay, hindi puwede yun', Well, I want an orchestra but it shouldn't be a big deal. When he [Jomari] saw the number [expenses], iba na, iba na yung usapan. They actually have a good team. Pops is doing this forever and this is Jom's first time, so it's good that she's there."

He also complemented Jomari for working very hard despite some expected rookie lapses.

"We never saw him," shared Martin when asked if his ex-wife's flame was consistently on hand during rehearsals.

"I mean he was always in different TV networks trying to get them to say yes to his prices. He did a very good job. We never saw him as he was really selling the whole Martin and Pops idea. Although I don't know how hard it was because everybody wants Martin and Pops," said Martin.