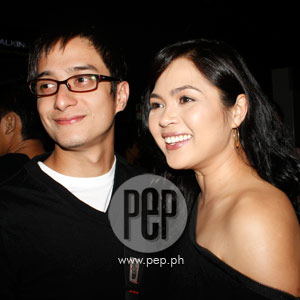 Judy Ann Santos and Ryan Agoncillo openly talked about their conjugal house and their upcoming wedding during the launch of the Ploning Foundation last night, February 22, at the Dolce Bar in Quezon City.

PEP (Philippine Entertainment Portal) previously reported that the wedding of Judy Ann Santos and Ryan Agoncillo will take place on May 4. Even though the couple were both tight-lipped about the wedding date, a source close to the family revealed that they had already settled on the day when they would exchange vows after being a couple for four years.

Last night, February 22, members of the entertainment press were able to ask Juday herself about the said wedding date. She launched the Ploning Foundation last night at the Dolce Bar in Quezon City. This group aims to help future Philippine entries to the Academy of Motion Picture Arts and Sciences, the award-giving body that gives out the coveted Oscars awards. Led by Judy Ann and Ploning director Dante Nico Garcia, this foundation can help future filmmakers raise funds for the promotion of the chosen Philippine entry similar to what they did for Ploning.


Judy Ann told Showbiz Central host and PEP blogger John Lapus that they were considering having May 4 as their wedding date. (Click HERE to read related article.)

Based on her research, what months are considered lucky according to feng shui?

The lead actress of Ploning says that she wants to have a simple, solemn and very elegant wedding, no matter what date they choose for the ceremony.

CONJUGAL HOUSE. Judy Ann and Ryan are already designing their dream house where they can raise Juday and Ryan's adopted daughter, Yohan, who will soon be entering school.

There have been rumors saying that she and Ryan already had a civil wedding.

Juday admits that she and her fiancé are considering a lot of things before settling down.

She confirmed that Megastar Sharon Cuneta will be her matron of honor while Dondi, Ryan's brother, will be best man. She also said that they already thought about their godparents but they have yet to ask them to be part of the entourage.

Who will walk with her down the aisle and give her away to the groom?

"Ang maghahatid sa altar, most definitely my brother. It's gonna be my brother and not my father," declares Judy Ann, referring to her older brother Jeffrey Santos.

Have they already talked about having their own kids?

"If it happens, it happens," says Juday. "Ako, ideally, I wanna get pregnant as soon as possible because I'm not getting any younger.

Does she want to have kids right after the church wedding?

What if she gets pregnant before the wedding? "Ay, hindi mangyayari 'yon. I have a promise to my mother and I will keep my promise to her," ends Judy Ann with a smile.