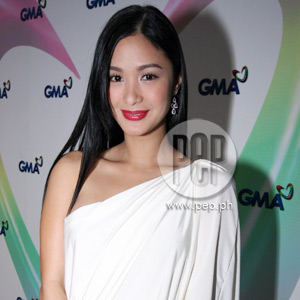 "Mr. and Mrs. Ongpauco said that both of them just came back from abroad and although they received the first legal letter sent to them by GMA Network, they were not aware and had nothing to do with legal letter sent to GMA Network by Rivera Santos & Maranan Law Offices," reads part of the press statement released by GMA Network Center about the meeting between Atty. Felipe Gozon and the parents of Heart Evangelista (in photo).

"The parents of Kapuso star Heart Evangelista requested for a meeting with GMA Network Chairman, President, and CEO Atty. Felipe L. Gozon. The meeting took place at 2 o'clock this afternoon in the office of Atty. Gozon.

"Heart's parents, Mr. and Mrs. Rey Ongpauco first apologized for the mess that is happening now between Heart and the network. Mr. Rey Ongpauco also stands as her primary manager.

"Atty. Gozon explained that the network is in the business of producing shows and hiring talents to perform in these shows. Furthermore, GMA Network abides by their contracts and it carefully assigns shows to its talents. Concerns regarding roles, delineation of characters, story executions, and the like should carefully be discussed among the parties involved.

"GMA Network also abides by MTRCB rules and regulations and it has never produced programs with bold scenes and indecent language. The character that Heart Evangelista was supposedly assigned to portray in Muling Buksan ang Puso does not include bold scenes and vulgar language which would adversely damage and prejudice her public image and reputation.

"Moreover, personal concerns from talents should always be discussed and adjustments are made accordingly and without prejudice to the creative execution of the story. He also added that the network is willing to compromise but not to the point of violating these contracts, with both parties mutually benefiting from the concession.

"Mr. Rey Ongpauco then expressed to the Kapuso President that Heart is only too willing to work because acting is really her passion. Both parents understood that it is also the network's decision where and in what timeslot to air the programs assigned to their talents.

"Since GMA had to proceed with the pre-production of Heart's supposed team-up with Dennis Trillo in Muling Buksan Ang Puso, the project has been assigned to other talents already. Heart will now wait for her new assignment which should also go into pre-production soon. There is no finality yet, but the network is eyeing on Ngayon at Kailanman as the next possible Sine Novela to be assigned to Ms. Heart Evangelista.

"The meeting ended cordially with both parties happy and with a stronger commitment to each other."