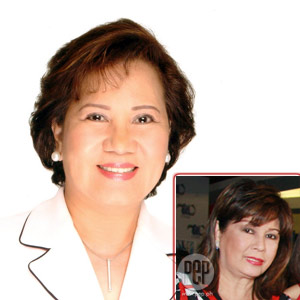 GMA-7 SVP for Entertainment TV Wilma Galvante (main photo) is keeping her silence over the new tension between her and talent manager Annabelle Rama (inset). "Her calling me names and her foul mouth are clear indications of her character and should simply be ignored," Galvante said in a short statement forwarded to PEP (Philippine Entertainment Portal).

Being caught in a verbal war against the quarrelsome talent manager Annabelle Rama is not new to Wilma Galvante, GMA-7 SVP for Entertainment TV.

And, as it was in the past, the network executive is dealing with the tension the way she knows best: keeping her lips sealed.

In a written statement sent earlier today, February 23, to PEP (Philippine Entertainment Portal), Ms. Galvante reiterated her desire to maintain silence in this new issue brought about by the reported refusal of Annabelle Rama and her ward, Heart Evangelista, to do an afternoon drama series.

Galvante's statement reads: "The issue between GMA Network and talent Heart Evangelista is already being handled by the network's Legal Department. Annabelle Rama's statements are her own opinion. Her calling me names and her foul mouth are clear indications of her character and should simply be ignored."

IMAGE BUSTER. The issue started after GMA-7 sent a letter to Heart and her management team reminding the actress of her obligation to abide by her contract.

Annabelle reportedly pulled out her talent from starring in Sine Novela's Muling Buksan ang Puso after noting the role would violate a prohibition set by a vitamin brand currently represented by the young actress. Heart will reportedly play the character of married woman with bed scenes and kissing scenes—a portrayal which Heart's camp feels would compromise her wholesome image.

Citing portions from Heart's contract, GMA-7's Attorney Dick Perez noted in the letter: "Talent hereby warrants and represents that: (a) she has full power and authority to enter into and perform this agreement; (b) she has no other contract with any other person, firm, corporation or other entity which will or might interfere with the execution or performance of this agreement (Emphasis: ours)."

Endorsement issues aside, the Gutierrez matriarch was supposedly irked with the timeslot of Sine Novela, which is in the afternoon programming, particularly when compared to Heart's recent project, Luna Mystika, which belongs to the elite list of primetime programs.

Responding to the network's letter, Annabelle Rama's lawyer Agnes Maranan of the Rivera Santos and Maranan Law Offices wrote that Heart's withdrawal from the project was not entirely influenced by the endorsement deal.

"First, our client has instructed us to correct the allegation in your letter that Ms. Ongpauco's [Heart's real surname] managers were turning down a program assigned to her by GMA because of restrictions in her endorsement contract with Centrum.

"During the meeting with GMA representatives, Ms. Ongpauco's managers, including our client, did turn down the network's proposal to have Ms. Ongpauco appear in the television series Muling Buksan Ang Puso, but their refusal was based NOT on any contract restriction imposed by Centrum, but because the role offered would adversely damage and prejudice Ms. Ongpauco's public image and reputation."

TEMPERS FLARING. The tension between Galvante and Rama intensified, following reports that the latter badmouthed the network executive through a series of text messages during a meeting with JC de Vera, another talent of Annabelle.

Galvante and De Vera's meeting was said to have been set to discuss a project and to address the rumor that the actor was moving to ABS-CBN.