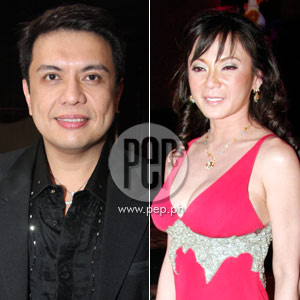 Dr. Manny Calayan (left) fires back at rival Dra. Vicki Belo (right) for her comment against his endorser Boy Abunda. "We are behind Boy Abunda, 101 percent. We understand his feelings and reactions to the ridiculing and insulting remarks he sustained from Dra. Belo. Promoting one's business or services by stepping on someone was uncalled for," says part of the letter from Dr. Calayan.

The rivalry between celebrity cosmetic surgeons Vicki Belo and Manny Calayan reached another level after the latter issued an official statement denouncing Belo's recent comment against talent manager-TV host, Boy Abunda. Abunda is one of the endorsers of Calayan Surgicentre.

Vicki, sitting in as guest in Showbiz Central last Sunday, February 22, made this remark on nationwide television: "And I'd like to say, if you want to look like Boy Abunda, then go to Calayan. But if you like to look like Dingdong Dantes and Piolo Pascual, come to Belo."

Boy did not conceal his disappointment on what he perceives is an off-color comment meant to ridicule him before the public.

"We are behind Boy Abunda, 101 percent. We understand his feelings and reactions to the ridiculing and insulting remarks he sustained from Dra. Belo. Promoting one's business or services by stepping on someone was uncalled for. Besides, Dingdong Dantes used to be our endorser and part of what he has become came from our services, and so did other of her big named endorsers: Claudine Barretto, Ruffa Gutierrez, and Katrina Halili.

"There's a simple reason for our 'TO C TO BELIEVE' campaign and that's more about inner beauty that's from a good and sincere heart like Boy Abunda, which transcends outward a person's life and touches other people's lives. And through that inner beauty, we see and believe in the beauty of other people and we believe in their goodness! We accept whoever you are, we make you feel good. That's the Calayan experience and that's TO 'C' IS TO BELIEVE!"