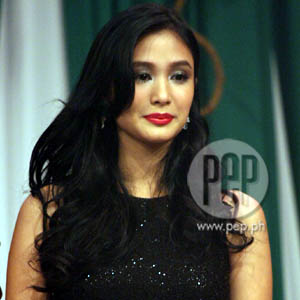 The Kapuso Network, through a formal letter sent to Heart Evangelista and her management team, answered point-by-point the issues concerning the young actress's decision to reject an afternoon drama series.

PEP (Philippine Entertainment Portal) received a copy of the latest letter furnished by GMA Network's Legal Department to the lawyer of Kapuso star Heart Evangelista, who is regularly seen in Luna Mystika. Copy of the letter was also sent out to Heart's management team; namely her father, Mr. Reynaldo Ongpauco, and co-manager, Annabelle Rama.

The letter, signed by the network's vice president for legal affairs, Atty. Dick Perez, aims to answer the escalating issue regarding Heart's reported refusal to accept the afternoon soap Muling Buksan ang Puso for fear that the role would jeopardize the chinita actress' wholesome image.

"We disagree with the claim that the role offered to Ms. Evangelista would, as you wrote, adversely damage and prejudice (Ms. Evangelista's) public image and reputation," the network argued in its letter.

It further stated: "You state that the role 'offered' to her 'could hardly be described as wholesome' as it would include kissing scenes and bed scenes. Ms. Evangelista had done kissing scenes and at least one bed scene in the past (i.e., in Asero) and those scenes, I'm sure your client Ms. Rama-Gutierrez will agree, hardly tarnished her wholesome image or prejudiced her highly successful career.

"In fact, you mention in your letter that her current program with GMA, Luna Mystika, after Asero, is a top-rated primetime program (as was Asero) which only means that her career had really taken off, kissing and bed scenes considered."

Heart's camp had previously expressed reservations, citing the demands of the role against her image. The network, however, explained that certain revisions and alterations are sure to be made to fit the medium and so as not to offend its expected viewers.

"You also claim that the role in Muling Buksan ang Puso 'could hardly be described as wholesome' as it would include 'dialogue and scenes depicting the proposed character as a mature woman competing with another for the affections of a man.' But there is as yet no script for the program; thus, there are still no dialogues or scenes written. The claim, therefore, is premature and without basis. You erroneously assume that the television version, in dialogues or scenes or presentation, would be similar to the movie version. GMA knows that it is a television program it is producing, so it has to steer clear of scenes and dialogues in the movie that might be considered inappropriate for television or prejudicial to Ms. Evangelista's image. As explained by our Entertainment Department, the television version is going to be a 'tamed' version of the original story as depicted in the movie.

"We might have agreed with you if Ms. Evangelista had to do bold kissing scenes or bold bed scenes. But, as your client knows, there are no scenes of that sort in the said program. We are fully aware—as your client should be—that the rules of the MTRCB do not allow the airing of such scenes on television and are also aware that as producer of Ms. Evangelista's television programs, we have an enormous stake in preserving her public image and reputation. Like your client, we do not want to lose Ms. Evangelista's fan base.

"We therefore consider unacceptable your client's reason for rejecting the program assigned to her. "

The network then made known its final decision to deny the role to Heart, "so as not to delay this project."

However, the decision doesn't mean that the network is willing to compromise or disregard its lawful right to impose the kind of projects they want to give to the young actress in the immediate future.

KOREANOVELA AND OTHER ISSUES. The last two points stipulated in the letter touched on the crucial issues raised by Heart's camp.

"You mention that it is your client that must now insist that GMA comply with its obligation to have Ms. Evangelista appear as lead actress in a Koreanovela series, citing Paragraph 2 of the Agreement.

"Indeed, Paragraph 2 of the Agreement provides that Ms. Evangelista 'shall perform and appear' as lead actress in 'a Koreanovela series.' But, as you are well aware, this paragraph speaks of obligations of talent. This is obvious from the text and even more obvious from the heading of the aforesaid paragraph. The heading of this paragraph, precisely, is '2. OBLIGATIONS OF TALENT.' This being so, it is GMA's right, not the talent's, to demand fulfillment thereof.

"Given that it is GMA's right to demand fulfillment of the obligation, GMA can waive the right, or waive its compliance. Rights may be waived by those who have them (see Art. 6, Civil Code). The waiver cannot be said to prejudice Ms. Evangelista because she is entitled to an annual minimum guaranteed amount under the Agreement (Agreement, par. 3.1).

"Clearly then, your client's insistence that GMA cast Ms. Evangelista in a Koreanovela series is misplaced and erroneous."

"Ms. Evangelista was not compelled to work beyond 3:00 a.m. If she had worked beyond said time, she freely agreed to do so. We would not have extended her working time if she had not agreed.

"There is no basis for your demand for overtime pay for Ms. Evangelista for work beyond the 3:00 a.m. deadline. Ms. Evangelista as you know is an independent contractor; hence, the labor standards mandated by the Labor Code do not apply in her case. Paragraph 4.1 of the Agreement makes this clear: 'This Agreement does not establish an employer and employee relationship between GMA and TALENT. TALENT agrees that as an independent contractor, she is not entitled to any rights and benefits granted to regular employees of GMA other than those specifically provided herein.'"