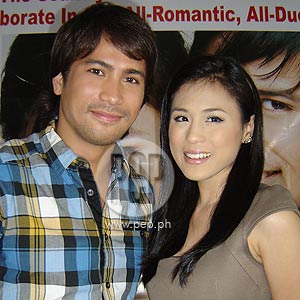 With their new project together, entertainment reporters teased Sam Milby and Toni Gonzaga about the "old flame" between them. Sam evaded the intrigue by saying, "I don't know what to say about that. Basta ano, we can't deny the chemistry. I have respect for Paul [Soriano]."

"Old issue na 'yan. There's no reason to make any comment about it," the singer-actor commented in an interview after the press launch of his newest music album with former onscreen partner Toni Gonzaga yesterday, February 27.

Although he admitted that he had a hard time after the breakup, Sam said that they have both moved on. "Masarap talaga to be in love, masarap talaga 'yong feeling. Siyempre, mahirap 'yong afterwards. Pero, you know, we both moved on and we're happy naman," he told the media.

The 24-year old music artist also said that he now enjoys his single life after the end of his relationship with the Dyosa actress.

"I'm enjoying my single life. Actually, wala akong dine-date," he said. "I think it's a good thing na may singleness or parang may panahon na you're single. Kasi ang daming people na they jump from relationship to relationship. You shouldn't be dependent on someone to have comfort na... If you always count on someone in a relationship, it's not good. It's good to be single sometimes."

GOOD CHEMISTRY WITH TONI. Sam also wants to move on from another old intrigue with Toni, with whom he admitted having a good chemistry when they were still doing movie and TV projects together.

It can be remembered that Sam and Toni starred in successful comedy-romantic movies such as Close To You (2006), You Are The One (2006), You Got Me (2007), and My Big Love (2008). During those times, their avid fans called SamTiners thought the two young actors would look good as a real couple. Unfortunately, it didn't happen. Sam had Anne, while Toni found her current boyfriend director Paul Soriano.

He added that it's better to maintain good friendship with Toni than taking it to the next level.

"Mas safe, kasi a lot of people think now na if you have such a good friendship, na baka masira ang ang friendship dahil sa [romantic] relationship. Basta, I like the relationship now."