Fans, friends, and supporters pour in at Francis Magalona's wake 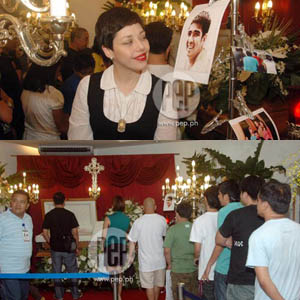 (top) Pia Arroyo-Magalona poses beside a photo of her late husband; (bottom) Fans continue to line up at Christ the King Memorial Chapel to pay their last respects to the Master Rapper.

It was an outpouring of love and support for a life unfortunately cut short by leukemia.

Fans, friends and supporters of the late Francis "Kiko" Magalona continue to arrive in batches at the Christ the King Memorial Chapel in Greenmeadows, Quezon City. Some of those who paid their last respects at the wake's first day were Kiko's Eat Bulaga! family led by Vic Sotto, Joey de Leon, Michael V, Pia Guanio, and Keempee de Leon.

Former president Corazon "Cory" Aquino—who herself is currently battling cancer—also arrived to extend her condolences to the family left behind by the 44-year-old musician-TV host.

Francis M's music—undoubtedly his most enduring legacy as an artist—was played in heavy rotation throughout the wake. Kiko always reiterated his desire to share his music and its message to the people.

Visitors and sympathizers are expected to double in the succeeding days. It was previously announced that public viewing is strictly from 6 a.m. to 6 p.m. only.

Regarded as the country's "Master Rapper" Francis was highly credited for breaking Pinoy rap music into national consciousness with the release of his 1990 debut album Yo! Since then, Francis continued to explore his music by incorporating various genres while pursuing in his other interests like photography, directing and designing.

It was last year that Kiko was diagnosed with leukemia, forcing him to give up hosting in Eat Bulaga!. Eight months after putting up a brave fight, Francis succumbed to his illness on March 6 at high noon.

Francis's remains will be cremated on March 11, Wednesday, 9 a.m. at the Loyola Memorial Park in Marikina City.


Click HERE to view PEP's tribute to the the Master Rapper Francis Magalona.