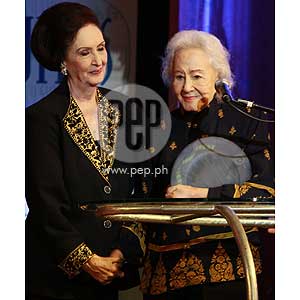 The Entertainment Press Society, Inc. (Enpress) gave honor to veteran actress Anita Linda (right) during the 6th Golden Screen Awards last night, April 30. The award was presented to her by veteran actresses Gloria Romero (left) and Celia Rodriguez (not in photo), and returning actor Gabby Concepcion (not in photo).

Luck was on independent film Boses during the 6th Golden Screen Awards of the Entertainment Press Society, Inc. (Enpress), which was held last night, April 30, at the Metro Bar in West Avenue, Quezon City. It received six of the 21 awards given, three of which were major awards.

Its director, Ellen Ongkeko Marfil, was named Best Director. While its screenplay, written by Froilan Medina and Rody Vera, topped the other five finalists for the Original Screenplay category. (Click here to read related article)

The Enpress also recognized the performance of first-time child actor Julian Duque by naming him Breakthrough Performance by an Actor. Boses also won for Best Editing and Best Musical.

Mylene Dizon was named Best Actress-Drama for her portrayal in 100. Mylene, who recently gave birth to her second child with Paolo Paraiso, was not able to personally receive her award since she is currently in the U.S.

Meanwhile, KC Concepcion was teary-eyed as she received her first acting award for her first movie For the First Time. She was having a conversation with her father, Gabby Concepcion, backstage when her name was announced as the recipient of the Breakthrough Performance by an Actress award.

The Philippine's official entry to the last Academy Awards, Ploning, got the Best Sound and Best Editing awards.

Aside from these awards, Enpress also gave honor to 85-year-old actress Anita Linda, who recently starred in the film called Adela, by giving her the Gawad Lino Brocka Lifetime Achievement Award.

Here are the other winners of the 6th Golden Screen Awards: