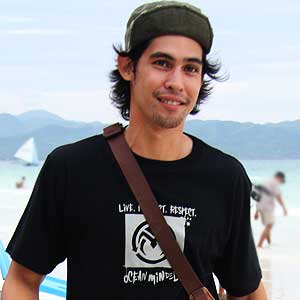 PEP (Philippine Entertainment Portal) witnessed how actor Paolo Paraiso rejoiced when he found out that his second son was born.

Around 4 p.m. today, April 22, Paolo immediately got up from the sunbed located in front of Sun Village Beach Resort in Boracay after reading a text message. And then he excitedly told the people who were with him at that time: "It's a boy! It's a boy!"

Paolo then made a series of phone calls and texts to his relatives.

When PEP had a chance for an interview, Paolo related that his former girlfriend, Mylene Dizon, had a normal delivery for their second son, Lucas Miguel. Paolo said that he was surprised because hours before the good news, he was still talking to Mylene, who was admitted to a hospital in Chicago.

Paolo said that incidents like this cannot be avoided, but he is happy about it.

Now that they have their second child, will they get back together as a couple?

In the end, he assured the media that although they're not together as a couple, "Magkaibigan kami, we're good friends. Sabi ko nga, we're parents to Tomas and Lucas."