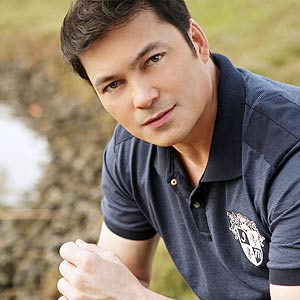 Gabby Concepcion on the business he left 14 years ago: "It's different now. Nung araw kasi, kung ano yung script na 'binigay sa 'yo, that's it. Ito [ngayon], papipiliin ka kung ano yung gusto mong gawin." He likes the transparency being accorded to him by ABS-CBN. The 45-year-old actor tells PEP: "Yung sa MMK [Maalaala Mo Kaya], I was given three choices. The one that gave me the most impact is the taxi driver,

The clamor for Gabby Concepcion has not ceased.

Twenty years ago, colegialas would go gaga over him. Fast forward to 2009, the same colegialas, plus their daughters, would still find him irresistible.

Even the business, which he left 13 years ago, has not lost its appreciation for his star value. Aside from his television and movie contracts with ABS-CBN and Star Cinema, respectively, he also snagged a recording deal.

And while his contemporaries have started assuming dad roles, the 45-year-old actor has maintained his leading man status.

Actually, if you ask him about the actresses he would want to have a project with, he would drop the names of mostly young stars.

Gabby did not mean to be overweening. He was just excited at the prospect of being teamed up with the brightest stars of today. Plus, he felt he had lost so many opportunities when he went into self-exile in the U.S.

He said, "I left show business about 13 years ago. Feeling ko, na-encapsulate ako. Tama ba yun? My mind is still back there.

As a matinee idol in the ‘80s, his life was an open book. Even when he was leading a private life as a real estate broker in California, showbiz media and press still managed to get small updates about him. When he made his comeback last year, Gabby became a staple in entertainment news, what with the issues that surrounded him.

For a change, we decided to ask him about the most trivial things in his life—his favorites and wants—and some details would really have you at hello.

Books: "What I really enjoy reading is yung mga National Geographic books, mga science books. In fact, hindi lang books, pati yung mga DVD about arthritis, about the heart, about the joints, stuff like that. Even before, interested ako sa mga science books and all that.

When he mentioned arthritis, heart, and joints, we remarked, "Gabby, you could've been a doctor."

"Well I wanted to be a dentist," he replied. "But my first love was, I wanted to fly. Dentistry became second, and then third itong real estate."

Speaking of real estate, does he miss the job?

Food: I eat almost anything, e, pero on top of the list, monggo. Any vegetable...I also like fish. I love fish, Bakalaw.

He related that when he appeared on Janice de Belen's show Spoon, he cooked monggo.

He shared an interesting anecdote about one of his film projects with LT, "Meron kaming ginawa ni Lorna, e, with Ishmael Bernal, what's the title of that movie?"

Gabby could not remember the title, "I'll let you know ‘pag naalala ko."

He resumed, "Meron kaming eksena na yung light, nasa likod, so, makikita mo yung highlight ng buhok namin, yung balahibo...So makikita mo yung highlight ng buhok, di ba? Dalawa kami ni Lorna she was at the bottom and I was on the top, we did a kissing scene and then, we released slowly, naiwan yung ano yung string of saliva and then it was such a close-up na parang alam mong walang daya. And everybody noticed that sa movie. Napag-usapan yan, wait lang...late 80's pa yata yun. I cannot ever forget that scene."

The movie's title was Nagbabagang Luha, with Alice Dixson and Richard Gomez.

"We don't want to be violent, pero if [a scene] asked for you to become violent, you have to parang you have to put yourself in a situation that makes you violent, that makes you go out of your mind, di ba? And it's difficult kasi yung energy nun, your heart starts to pump, your energy goes up, maybe your adrenaline pulls you there, I don't know. But it's strenuous, emotionally, mentally, physically.

"‘So yun, you try to snap back right away. Just relax, take it easy. You don't think of anything, it's like meditating. That's how I do it, e, I just keep quiet, reflect, sit down...Just relax, basically that's what it is, and just get grounded again.

Old songs: He wants to revive songs of yesteryears. "A lot of songs made by Dean Martin. You know the old ones? Sina Frank Sinatra...

Wishes: "I wanted to settle my unsettled relationships, sila Sharon Cuneta, the people that I hurt, I want to clear that out. The cases that I left behind which I'm already handling now. If I hurt anybody in whatever way, I want to settle that.

"I want to leave show business with a good name. Yun ang gusto kong mangyari kasi, when I left, I did not have an opportunity to leave with my name untainted..."

On the spot, he came up with a tagline: "Marami nang dumating pero nandito pa rin."

He added, "I'm telling you, sometimes nagiging creative ako sa mga lines, dialogues...And that's the magic of show business. The magic happens when you're shooting or on the set. That's the mystery of being in this industry. Ako, I don't even know what's going to happen next. The whole thing is a mystery to me."

He surely had his ups and downs, breaks and mistakes, but there's nothing he would want to change in his life. He realized that even the bad mistakes and choices he made in the past turned out to be blessings in disguise.

We asked him: "What will make you quit showbiz?"

The dad of KC Concepcion paused for a few minutes, then answered, "Overwhelming stress? Or siguro, if it's no longer working out."

But that's not looming over the horizon yet. Gabby still has the public's support—for one, he's still swoon-worthy; another thing, the man has both depth and maturity.