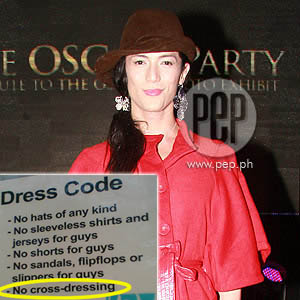 "'Rules,' Franklin D. Roosevelt once said, 'are not necessarily sacred, principles are."' The incident that happened to me and my friends on the night of April 23 is an example of rules violating the principles which motivate humanity to live in equality, to treat each other with respect, and to uphold each other's dignity.

"I was all set to watch Rannie Raymundo's show in Metrowalk. Dee and my assistant Sass were with me. I didn't know where exactly in Metrowalk the show would be. So while I was on my way, I texted Maegan, who would also be watching with us. She told me that it was going to be in Aruba Bar and Restaurant.

"Upon hearing that it was going to be there, Sass brought up the unfortunate incident Inday Garutay [a standup comedian] experienced there. I heard it before but I didn't know that it happened there. Feeling worried, I requested Sass to ask Aruba Bar and Restaurant whether they have any problem with me watching the show.

"Sass talked to the bouncer of Aruba Bar and Restaurant but she was then referred to the manager. She asked Sass: "What is she wearing?" Sass told her that I was wearing what every woman wears.

"The manager then reiterated the blatant 'No Crossdressing' policy hanging on their door. Sass refused to accept her reasoning. The manager then offered to consult the owner of the bar.

"The manager returned and gave a compromise: We can stay outside of Aruba Bar and Restaurant. Sass left and narrated what she was told. We left Metrowalk and transferred into a bar that understands that bigotry is not a sound business strategy.

"I have felt perhaps the same feeling Rosa Parks felt when she was asked to give up her seat so a white passenger could sit. We, and countless human beings like me, suffered and continue suffering the same indignity of discrimination:

"I wasn't demanding any special treatment from them. I was just there looking forward to enjoy the music and performance of Rannie, just like any other human being inside their bar.

"Certainly, I dressed up as a woman because I am a woman. If I dressed up in a masculine way, that would be the time that I would be crossdressing. But let's discard all the labels, it's not the issue.

"I don't understand where they are getting these special rights. My Christian upbringing has instilled in me one of the two greatest principles Jesus Christ deemed to be the commandments at which all commandments bow.

"This principle is also common in all spiritual teachings: 'Thou shall love thy neighbor as thyself.'

"We can also find this same principle in the Universal Declaration of Human Rights: 'All human beings are born free and equal in dignity and rights. They are endowed with reason and conscience and should act towards one another in a spirit of brotherhood (Article 1). And 'everyone is entitled to all the rights and freedoms..., without distinction of any kind, such as race, colour, sex, language, religion, political or other opinion, national or social origin, property, birth or other status (Article 2).'

"This is also echoed in the Yogyakarta Principles: 'All human beings are born free and equal in dignity and rights. Human beings of all sexual orientations and gender identities are entitled to the full enjoyment of all human rights (Article 1).'

"Even the Philippine Constitution upholds this: 'The State values the dignity of every human person and guarantees full respect for human rights. (Article II, Section 11).' Jesus Christ was all about love, compassion, and inclusion and never about discrimination. The Philippine Constitution and international law are all about upholding the dignity of each human being regardless of who and what they are.

"Without a need for complicated mental calisthenics, discriminatory rules, practices, and policies are very incompatible with these principles. And history has shown that rules, practices and policies constantly change so society can fulfill the highest principles of humanity: women getting the vote, end of apartheid, outlawing child abuse, to name a few.

"Since when did a business license become a license to violate human rights? Does my gender identity & expression violate their right to conduct their business in a socially responsible way? Why are we turning a blind eye to this inhumanity?

"Enforcing gender conformity is not, and will never be, a corporate social responsibility; ending discrimination is. Philippines, it's NOW time for change.