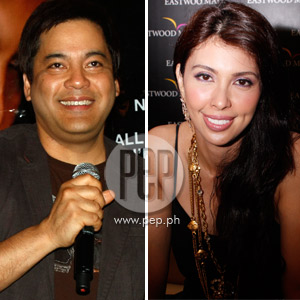 The Concert Queen, Pops Fernandez, would not let heartbreak cloud her present outlook. "I'm okay now," she assured the entertainment reporters. "Like what I said, it took me a while to be at this present stage na I'm kind of okay, so I want to keep it."

With all the bad vibes momentarily being set aside, Martin and Pops recorded a duet of "Goodbye Girl," a 1978 hit ballad written and originally recorded by former Bread lead singer David Gates.

Martin's guest appearance in her album was a gesture of goodwill, according to Pops. For Always, Martin's latest record released a couple of months back, includes the song "Reunited," in which Pops joined Martin in recording the said track.

"Goodbye Girl," despite its title, is a positive song.

"Actually, siyempre lalagyan ng meaning ng ibang tao, pero it's one of the better songs that we recorded in the album. Very hopeful and also very positive. It's a different kind of situation naman kasi nung pumili kami ng songs sa album kailangan iba-iba ring situation. Siguro, alam mo na, people will always relate the songs to whatever it is that happened in our lives," explained Pops.

TAKING A BREAK. Now single again following her breakup with actor Jomari Yllana, Pops's aura at the launching of Hope last April 24 at the Eastwood Mall in Quezon City conveyed strength and grace.

Working hard while simultaneously nursing a broken heart wasn't a terrible thing after all, according to the Concert Queen: "It eased my heart a little bit."

When news came out confirming Pops and Jomari's separation, Martin talked quite a bit about his ex-wife's former lover. Martin's concern for Pops prompted many to wonder that perhaps a second crack at romance is still highly possible at this point.

"To be honest with you, baka akala n'yo parati kaming nag-uusap, hindi. Siguro pag may chance lang, especially with the kids coz I don't want to mislead the people. He's there when we need to talk about the kids. He guested in the last two CDs of the Divas [Pops's collaborative project with fellow singers, Kuh Ledesma, Regine Velasquez, and Zsa Zsa Padilla] and, of course, we're very grateful that he shared his talent with the four Divas. Pero as far as I'm concerned, 'yon lang 'yon ayoko din kasi mag-mislead ng mga tao."

Pops says that mutual respect between her and Martin is the main reason why personal issues never hindered their professional partnership.

"Even before this whole thing [breakup with Jomari] happened [we're okay]," said Pops, "I think that's the reason why nakakapagtrabaho kami."