MTV sizzles this May! 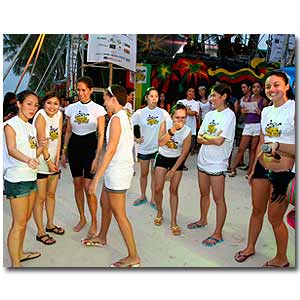 MTV Summer Break and The Source bring parties to the next level, and have definitely found their way to everyone’s summer plans!

MTV Philippines brought the house down this year with MTV Summer Break: Rasta Rhythms and The Source last May 1 and 2. Leading the scene to the shores of Boracay, MTV elevated partying to the next level.

Rain or shine, there was no stopping MTV as it sparked the reggae vibe in Guilly’s Island with Summer Break Rasta Rhythms!

Meanwhile, The Source on MTV pumped up the volume and uncovered life after dark. The sexy summer night kicked off with Chello Aestrid, Q York and Khen Jhons performance to the beats of DJ Flavamatiks.

After GSM Blue’s game, everyone got groovin’ to the down and dirty vibes of the Funk Avy, DJs Benjo Marquez and Erwin Edralin. The sultry pole dancers also captured everyone’s attention!

Now on its third year, and at least five rave parties on its belt, The Source on MTV have been definitely showing what a party should be like!

What more can you ask for every summer? We’ve got you the sun, sand and the sea all together with music, celebrities, thrilling games, and big prizes! Only MTV can offer a summer experience like no other, with MTV Summer Break and The Source!